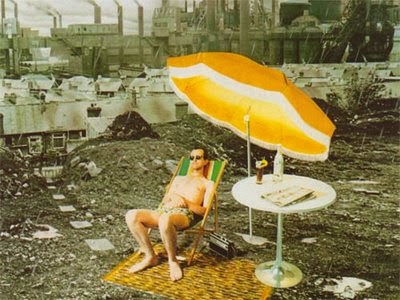 For some years now the media have been bombarding us incessantly talking about the economic crisis that shows no sign of abandoning us. Although it would not be necessary because we live with it every day, like those uncomfortable visitors who have settled into our house and have no intention of leaving.

As a result, many people have stopped living and are just surviving. What I mean? I am not only referring to economic poverty, but I am also speaking of spiritual poverty, despair, lack of goals and hopes for a better future.

But since there is everything in the "vineyard of the Lord", we find those who fall into the deepest depression and those who seem to have left their life on standby, trusting that the crisis will pass soon and everything will return to the way it was before. In one way or another, everyone has stopped living to just survive.

The funny thing is that this change of attitude is determined not only by the vicissitudes of life (for example the loss of work or home), but, in a certain sense, it is also supported by television and different media: newspapers, radio, Internet. Everything indicates that in times of crisis it is normal for us to feel desperate, sad and try to survive as best we can.

From a certain point of view, it is normal and understandable that a loss or downsizing of the lifestyle we have been used to can cause sadness. But the truth is that we must make a distinction between economics and health, between money and happiness, between economic well-being and psychological well-being.

There are millions of people living below the poverty line, the one set by Western countries, but they don't just survive. In fact, some studies from recent years show that happiness levels are higher in these countries than in the large industrialized nations of the West.

What I mean is that it is difficult to drastically reduce the standard of living we have become accustomed to, but taking a defeatist attitude and letting ourselves fall into the clutches of depression does not solve anything, on the contrary, it takes away more well-being and quality of life than it does. take away the lack of money.

Furthermore, we must always remember that the economic crisis it always contains two meanings: one negative and one positive. Right now, many businesses and businesses are closing, but new businesses and opportunities are opening up that are better suited to current world conditions.

Now is the best time to remember this ancient story:

“An old master has decided that in the afternoon he will visit one of the poorest places in the province with his disciple. After walking for a long time, they come across a semi-destroyed shack. However, the most surprising thing is that eight people live in that hut of just six square meters: father, mother, four children and two old men.

The sad looks and the low heads left no doubt that poverty and misery had not only seized their bodies, but had also found space within them. Curiously, in the midst of all this poverty and total hardship, the family had retained only one extraordinary property, a cow that provided milk to the whole family. This cow was the only material asset they had and the only thing that separated them from absolute poverty.

The next day, very early in the morning and taking care not to wake anyone up, the two travelers were preparing to continue their journey. They left the hut, but before leaving, the old master, in front of the incredulous eyes of the young man and without his being able to do anything, takes a dagger from his bag and with a decisive blow slaughters the cow that was tied to the door of the house.


- What did you do master? How could you have killed this poor cow who was their only source of survival?

Undaunted and oblivious to the concerns of his young disciple and ignoring his question, the old man resumed his march at a brisk pace. Thus, leaving behind that macabre scene, the master and disciple left.

The story goes that, a few years later, the two men decided to return to that place to see what had happened to the family. They searched in vain for the humble home. The place appeared to be the same, but where there was a dilapidated shack a year ago now stood a large house which apparently had been built recently.

They paused for a moment to observe from afar, making sure they were in the same place. The first thing that crossed the young man's mind was the presentiment that the cow's death had been too hard a blow to that poor family. They had probably been forced to leave the place, and a new family, with more possessions, had bought the land and built a better house on it.

Imagine the surprise when, inside the house, he saw the same man who had hosted them a year ago. However, his appearance was completely different. What happened?

The man confessed to the two travelers that their first reaction to the cow's death was one of despair and anguish. But after they realized that they needed to eat, and thus obtained some seeds, they began to plant them. They began to sell the excess crop, and from time to time they managed to save money: and so came a little bit of abundance. "

But beyond economic wealth, the important thing is never to be willing to sacrifice our happiness.

add a comment of Economic Crisis: To Live or To Survive?