Co-dependence in the couple: When is it pathological? 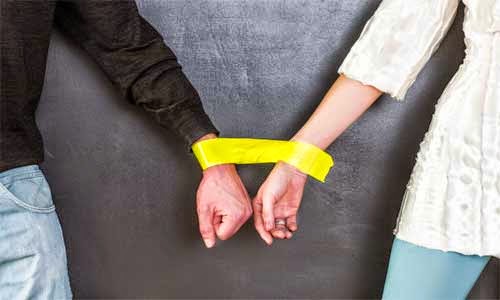 In the jargon of psychology, the term "codependent" is used to define the behavior of someone who is strongly attached to a person (it can be a spouse, a child or a friend), to the point of developing a pathological relationship. Of course, being a codependent person causes suffering. The first National Conference on Codependency was held in the United States in 1989, and the term has taken on different meanings ever since. Some experts define it as "a set of typical behaviors that are characteristic of members of a couple / family of people with addictions or compulsive personality disorders and other psychiatric disorders".

However, the fact is that codependency is not always linked to psychiatric disorders. It would be better to define this problem as "a pattern of painful addiction accompanied by compulsive behaviors and the need for approval from others, in order to find security, self-esteem and identity".

From this point of view, we can see that the codependent person has a profound difficulty in finding personal satisfaction on their own. He depends on others because he sees in them the power to quench his thirst, he finds in others the answers to his emotional needs.

Who are the codependents?

Often codependency is combined with borderline personality disorder, drug addiction, alcoholism, sex addiction or gambling, and other psychological disorders that push the person to "get rid" of his ego to dedicate oneself completely to the other.

However, in many cases, especially when emotional dependence occurs in a couple's relationship, it goes undiagnosed. Failure to diagnose worsens the condition of the codependent person as he experiences a constant malaise that is not understood by those around him.

What happens in the life of a codependent?

When the person is codependent, he loses a large part of his identity and focuses entirely on the other. This causes his thoughts, financial resources, time and social life to be limited to the relationship with the other person. Finally, it invests so much energy and time that it has virtually no room left for itself.


If this condition persists over time, it can cause an alternation of ambivalent feelings towards the "executioner", feelings ranging from anger at lack of gratitude to the sense of guilt that usually follows anger, thus creating a vicious circle from which it is very difficult to get out.

This emotional condition of "slavery" can generate pathological conditions that manifest themselves with symptoms such as anxiety, depression, somatization or altered nutrition and sleep. In severe cases, suicidal thoughts and paranoid ideas may also appear.

Can anyone become codependent?

Yes. Although some personality types are more prone to developing this type of symbiosis.

In fact, some people seem to have a natural tendency to constantly get involved in the relationships they are subjected to. Even if not knowingly, the fact is that these people often choose a partner who is inclined to adopt the role of "executioner". This may be because they already had relationship patterns that followed this pattern (like parents), or because they feel good about eliminating themselves, perhaps to avoid facing their personal difficulties.

What can you do?

Getting out of a codependent relationship is very complicated. The first step is to recognize the emotional condition of "slavery". Hence, the ideal is for the person to receive specialized help.

Cooperation in humans and primates ❯

add a comment from Co-dependence in the couple: When is it pathological?