What is the secret to making the couple relationship stronger according to the theory of acceptance and commitment? In this article, we review it with Russ Harris. 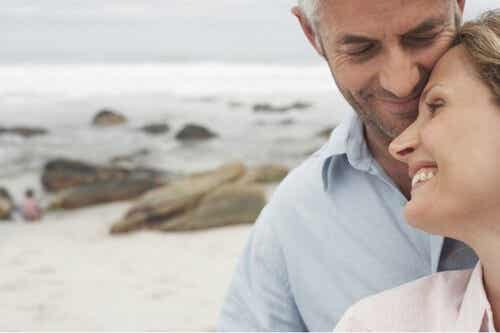 Russ Harris is one of the psychotherapists who favor an approach focused on acceptance and commitment therapy (ACT). Of British origin, he is today one of the most well-known ACT experts. Russ Harris applies this therapy individually, but not only when loving as a couple becomes particularly difficult and emotions are on the surface.

Harris is the author of The Happiness Trap, one of the best-selling books on self-help, and ACT with love, currently not translated into Spanish. In it he presents the key ideas thought for to love as a couple and to manage conflicts according to the therapy of acceptance and commitment.

The difficulties of loving as a couple

Relationships have their ups and downs. That is to say, they can be wonderful and terrible depending on the day. The difficulties of couple love are due to the challenges that arise from talking about emotions in the relationship and on an individual level.

Emotions that, being dynamic by nature, change. The first phases of the relationship are characterized by attention and dedication to the partner. When the relationship is now stable, however, the intensity with which we experience these pleasant emotions also becomes decisive.

Loving can also arouse unpleasant emotions; sometimes because we expect the partner to satisfy all our needs and requests, triggering a cycle of malaise from which it is not easy to get out.

This vicious cycle leads the couple to focus more on what one does for the other than on what it brings to the relationship or on the aspects to change.


As far as attention is concerned, shortcomings or unfulfilled expectations begin to emerge with respect to needs or expectations met.

A couple's relationship can also be damaged by a series of clichés that society feeds and transmits. Wrong beliefs that interfere with the expectations that one has about the other, about the roles that each should fill or about the demands to be made. Let's see below the most common clichés.

Let's talk about the ideal person, without flaws, who satisfies all the needs of the other at his own expense. This fantasy imposed by society in the form of novels, romantic films or even fairy tales weighs on the relationships of the couple.

Adopting such a rigid view of your partner's perfection involves comparing your relationship and how love is shown with other couples.

Beliefs about what a relationship should be like and how the partner should behave can collide with reality. On the contrary, the opposite effect is obtained: bring out or highlight the fragility of the relationship.

Half of the apple

The belief that they are born as incomplete beings, who need to meet their other half in the course of their life. In how many famous refrains do we hear the words "without you I am nothing"?

The problem is that doing so gives the other the responsibility to meet our needs. Furthermore, we tend to think that love must fill its voids, with counterproductive consequences for the relationship.

Some people actually follow this idea to the letter, becoming dependent on their partner and trembling at the very thought of leaving them.

Love is a simple thing and it lasts forever

Love as a couple can be easy during the early stages of the relationship. Nonetheless, with the passage of time the differences between the two people become more evident. Let's talk about the so-called incompatibility.

These incompatibilities make us go back to the first point, that of the "perfect partner". Love as a couple, therefore, is not easy. To make him survive the difficulties, there is a need for understanding, complicity or intimacy, as well as dealing with key issues and accepting differences without turning them into a tool with which to hit the other in moments of crisis.

Love as a couple: mental flexibility in the relationship

Russ Harris refers to the concept of psychological flexibility to describe how one must love as a couple. It indicates an open approach to the couple's daily life situations to implement direct action.

Acquiring greater elasticity from a psychological point of view brings several improvements in situations that cause discomfort. Among these we find:

Who are the intended recipients of this book?

As mentioned at the beginning of the article, ACT with love has not been translated into Spanish at the moment, so it can only be read in English. Russ Harris alludes to the main recipients who can benefit from reading this text, namely:


IThe book summarizes different ways of applying the theory of acceptance and commitment in the couple relationship. At the end of each chapter a series of activities are proposed for couples or therapists who want to move from theory to practice.

However, this is not a panacea for difficulties in a love affair. Russ Harris describes theoretical concepts, examples of everyday life and techniques aimed at improving the couple relationship. In some cases these strategies may work, in others they may not.

The results will depend on the people involved, the stage of the relationship and breakup. Also for this reason the advice is to make sure that any intervention comes guided and supervised by an experienced specialist.

Friends of our children, why is this not possible? ❯