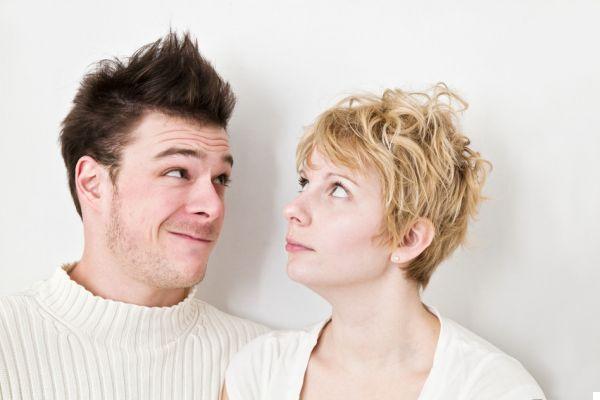 In a relationship it is important that both bring their grain of sand and are able to stop what John Gottman, one of the greatest scholars of relationships of recent times, has called the Four Horsemen of the Apocalypse: the criticism , defensive attitude, contempt and obstruction.

However, a series of studies conducted by Gottman himself at the University of Washington, in which hundreds of couples were followed for over a decade recording some of their conversations and discussions, indicate that one of the keys to having a happier marriage and reducing likelihood of divorce lies in the emotional intelligence of the couple, especially that of the man.

Relationships can survive moments of anger, complaints and criticisms, but there is a point of no return where the negativity creates further negativity where it is necessary for one of the two to be able to stop and play down the conflict.

Interestingly, according to Gottman's research, 65% of men increase negativity during an argument, often responding with a defensive attitude that reveals resistance to partner influence. Furthermore, there is an 81% chance that a marriage will fail when the man is unwilling to share power with his partner.

The problem is that when the man has not developed his emotional intelligence sufficiently, he rejects the influence of his partner because he fears losing power. Therefore, everything that this says or does is perceived as an attack, which in turn generates a defensive attitude and leads to a new attack causing an escalation of frustration and anger.

Conversely, an emotionally intelligent man is able to perceive and take into account his partner's emotions. This means that he does not stop at the words, but goes further to perceive their meaning, this allows him to tune in better and "extinguish" the fire caused by the discussion instead of feeding it.

Furthermore, when the man has developed his emotional intelligence he is not afraid to express his feelings, and this also helps him to get in tune with his partner. We must not forget that emotions such as fear and sadness generate empathy and encourage the other to make peace.

Of course, this doesn't mean that women don't get angry and increase negativity in arguments. In fact, the study found that many women often resort to reproaches. But they were also much more receptive to their partner's influence and took their emotions and feelings into account.

Are men from Mars and women from Venus?

One book states that "men are from Mars and women are from Venus". It's actually not quite true, there are more things that unite us than that differentiate us, but sometimes in relationships, men and women feel like they come from different planets.

Normally these differences begin to take shape in childhood. When boys play their goal is usually to beat the opponent, and if someone gets hurt, unless it's really bad, the game continues. Children are told that they should not cry or appear weak in front of others. Obviously these stereotypes are progressively fixed in their mind. On the contrary, in their childhood games, girls tend to adopt roles as social workers or nurses, in which emotions are fundamental.

Over time, these differences tend to reinforce, although that doesn't mean that women and men all fit these patterns. Some women can become very numb while some men are able to develop a high sensitivity. But according to Gottman, only 35% of men manage to develop high emotional intelligence.


The key to a long and happy relationship: Accept the influence and learn to connect

Other psychologists analyzed the influence of emotional intelligence on the duration of the relationship and the satisfaction of its members. A meta-analysis conducted by researchers from the University of Punjab revealed that emotional intelligence is a good predictor of the length of a marriage, especially characteristics such as empathy, emotional assertiveness, self-control and self-knowledge.

Another research conducted by psychologists at Clark University with 92 couples revealed that the ability to identify and express emotions is essential for maintaining a marriage for a long time and for both people to feel happy and satisfied with the relationship.

In addition, Gottman also found that when women raise their complaints in a gentler way while also adding a touch of humor, men are much more receptive and less belligerent.

All of this indicates that men and women should assume that the relationship does not have to be a battlefield or a space in which to measure forces. It is important for both of you to accept the other's influence, recognize their mistakes and learn to reduce tension when it risks spinning out of control.

To do this, both of them must compromise and, above all, they must be able to put themselves in the other's shoes and learn to express their needs and desires without attacking or criticizing. While there are several studies that indicate that women are more emotionally intelligent than men, we must not forget that emotional intelligence is a broad concept that encompasses several domains.

Daniel Goleman himself said that one of the gender differences is that women are more empathetic, while men are more action-oriented. The insula, a key area for empathy, remains more active in women but quickly "deactivates" in men, who tend to quickly take action to find a solution to the problem. One form is no better than the other, both are valid and we can use them to nourish the relationship. After all, two people don't need to be alike but able to complement each other to find balance.

The dream across cultures ❯

add a comment of The secret of a happy marriage? That the man is emotionally intelligent