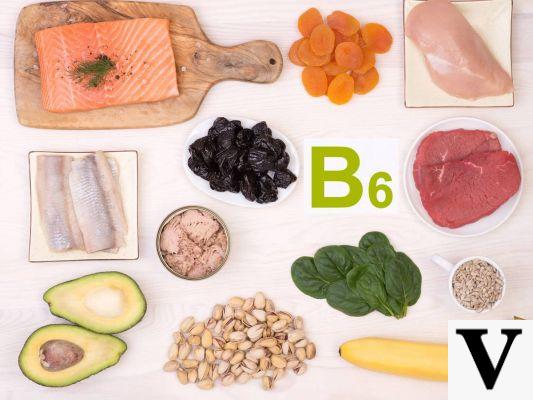 Vitamin B6 is widespread in foods of both animal and vegetable origin. Part of the vitamin B6 present in plant foods is in the form of pyridoxamine glycosides, which cannot be hydrolyzed by intestinal enzymes, therefore not biologically available. There is no specific data on the vitamin B6 content in your country's diet nor on the nutritional status in vitamin B6 of your country's population.

Due to the strict dependence on the amino acid metabolism, the requirement of this vitamin is calculated according to the protein content of the diet. Based on protein depletion and repletion studies, with measurements of the nutritional status for vitamin B 6, it was found that a level of 13 mg / g of dietary protein was able to maintain a good state of vitamin nutrition. Therefore, the European Scientific Committee has set a recommendation for adults equal to 1,5 mg per 100 g of dietary protein (Commission of the European Communities, 1993), considering a protein intake of about 15% of the energy of the diet. , in the adult and in the child. This recommendation is therefore also adopted by the present edition of the LARN. During pregnancy and lactation an increase of 20% and 30% respectively is recommended.

1 The upper limits of the age range are intended up to the completion of the next birthday (for example "1 - 3 years" means from 1 year just completed until the completion of the 4th year). The last age group of the woman is "50 and more" because with the menopause the needs of two important nutrients change: calcium and iron. In humans, the last age group is "60 and over".

11 The need for vitamin B6 was calculated on the basis of 15 mg / g of protein intake and considering that about 15% of the energy intake is ensured by proteins in both children and adults.