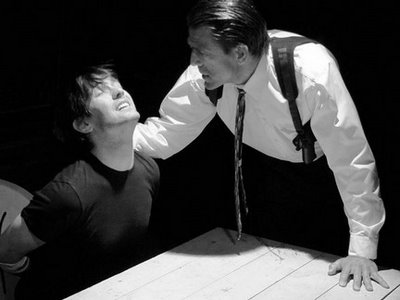 You believe that interrogations favor confessions
false? Everyone would probably answer yes. Indeed you are right, but
maybe you are making a slight association between interrogation and torture, that
it's not the same.

One of the films that palpably highlights the
relationship between torture and false confessions is "the last inquisitor", with
protagonist Javier Bardem. In this film, the father of a young woman who was
taken prisoner by the Spanish Inquisition, she makes Bardem sign a confession
in which he claims to be a donkey (precisely the animal). His
intention? Show him that, under torture, anyone would confess to any
atrocities, even the most unlikely. Anyway, now I will refer to other confessions:
precisely those that occur daily in the courts and that
have as their objective the conviction of the accused. Jessica Klaver, University psychologist
Simon Fraser, in Canada, has designed a very peculiar experiment, in which
not only is it analyzed how interrogations induce lying but also in
what extent this takes place. For this purpose, two techniques of
interrogation: "minimization" (the one where the damage produced is minimized
from the behavior of the accused) and "maximization" (where the
damage and the severity of the actions). Two hundred students were invited to take part in
a test of personality and ability in mechanography. At the precise moment in which
the mechanographic task had to be developed, they were warned that if
had pressed the "Alt" key could have caused the breakage of the
computer and as a result all data would be lost. When the students pressed the corresponding key
at the "z", very close to the "Alt" key, the researchers simulated the breaking of the
computer and accused them of pressing the forbidden key. The next step was to submit the
students in minimization interrogations in which the typical sentences were: “not
worry ”,“ it was just an accident ”, sooner or later it had to happen”, “the
program was already old. " While other students were subjected to
maximization interrogations in which an attempt was made to make them heard
guilty with phrases like: "you must have pressed the button", "on this
computers over 50 people passed this week and it hadn't happened
nothing". The results? 43% of the students signed one
confession in which he swore false, that is, that they had pressed the "Alt" key.
But… contrary to what one might have imagined, the higher index of
confessions (4 times greater) occurred among the students they had
supported the minimization interrogations. Because? Probably because in real life the techniques of
minimization give a false sense of security, as they offer moral excuses
or legal ones to grab onto. They also help to conceptualize the
actions as accidental. In short, they transfer the blame to the victim and
underline the little importance of the charges attributed to the guilty, subtracting him
part of the responsibility. In this way, the person feels freer than
take responsibility, even if it is not his. A second surprising result is that
female students were more likely to fake theirs
confessions, as much as the students as in the suggestibility test
they had achieved the highest score.
Eyes never lie: poker face ❯