You always say "yes" when you want to say "no" 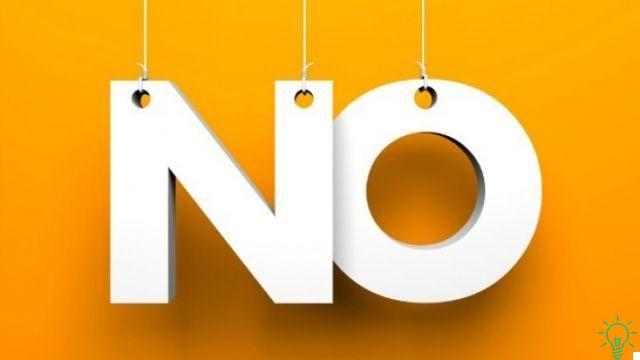 Someone asks you something and you say yes, maybe not immediately, but you end up giving up, even if you don't want to. However, as soon as that "yes" comes out of your mouth, something inside you gets stuck. You begin to think about everything that this new responsibility will entail. Maybe you remember the last time you helped that person and they didn't appreciate what you did. Or you can think of the personal problems it caused you to offer that help.

Then your brain starts making excuses, while you long for it not to be too late to back down. But since you have already given your word, come to your senses, overlook the excuses and decide that you will help her. For the last time. You resign yourself. Again. And so on again and again.

If this scenario is familiar to you and repeats itself more and more often in your life, to the point of feeling used and manipulated, you probably need to set limits, you need to know how to say no. If you don't, you will end up overwhelmed, saturated with tasks and responsibilities that probably don't match and generate enormous stress.

Why do I always say yes when I want to say no?

- Do for others what you would like them to do for you. If you are always willing to help others, even when help is a heavy burden on you, chances are you have a deep sense of duty. You show yourself available because you expect others to do the same, because they have taught you that self-sacrifice is a positive value that we should all put into practice. The problem is that many people will not be willing to do the same for you and will probably take advantage of your kindness.

- You want to keep your word. Chances are you are a responsible person, so once you compromise with something, you get it done. You may not have carefully considered what the request entailed and rushed to respond, but since you think it is not okay to change your mind and withdraw the offer of help, go ahead, even if it involves a great sacrifice for you.

- You're afraid of losing the person. If you always say yes when you want to say no to a person, you are likely in the background motivated by fear of loss. You do not set limits because you fear that the person will reject you or abandon you if you do not give in to their requests or are not available to them. If so, chances are you are one step away from suffering from the doormat effect.

- You don't want others to think badly of you. Sometimes, you are likely to give in to pressure from others because you want to avoid the shockwave that your rejection could cause. For example, if you refuse to help a friend and are concerned about what the rest of your friends will think of you or refuse to help a family member and are concerned about the reaction of the rest of your family.

- You have the savior complex. In this case, you are likely to feel an urgent need to "rescue", "care" or "help" other people, even at the cost of sacrificing your own needs. This behavior is based on the belief that those who offer themselves to others are better. Therefore, these are people who try to strengthen their identity by giving themselves to others.

- You don't appreciate yourself enough. If you say yes all the time when you want to say no, putting the needs of others before your own, it is likely that you have a self-esteem problem. If you don't appreciate yourself enough, if you don't value your time and energy, you will be more inclined to give in to the demands of those around you because you consider their needs and desires more important and precious than yours.

The dangers of saying yes when you want to say no

- Resentment. One of the main consequences of not setting limits is that you will end up giving in to the pressure of others and then, when things don't go well, you will feel resentful. You will likely end up feeling angry, frustrated, and upset because you tried so hard and maybe you didn't get the right recognition.

- Deterioration of the relationship. When a person constantly asks you and you give in, an imbalance of power is established in which you are the loser. It is not strange that these relationships end up suffering or even break up, because it is likely that you blame that person for your dissatisfaction and end up taking the frustration on them. A situation that could have been avoided by setting healthy limits from the start.

- Dissatisfaction and stress. Continuously giving in to the demands of others generates enormous stress. These new commitments and responsibilities add further tension, which will end up generating profound personal dissatisfaction because your needs will remain unsatisfied. By caring so much about others you will end up forgetting about yourself.

Learn to say "no" assertively

Brown states that “the sustainability of giving and loving without falling into resentment and bitterness can only come from a feeling of personal abundance. And that personal abundance will not exist without limits.

“When we don't set limits or respect them, we feel manipulated and used. Therefore, we attack the people we hold accountable, instead of addressing their behavior.

"We find it difficult to understand that we can be compassionate and accept those people while holding them accountable for their behaviors."

In his speech there are several important points that we must make our own in order to learn how to say "no":

- Assume that setting limits does not mean being rude, aggressive, selfish or insensitive. Setting limits is, fundamentally, an act of self-compassion and self-determination because it involves being aware of our needs and rights. We need to understand that love and respect for others begins with self-love and self-respect.

- Set the limits. Maybe you take on certain commitments and responsibilities because you are not aware of your limitations, you think you can do everything, that you can do your part and that of others, even if in reality it is not like that. To avoid this "miscalculation", before setting limits on your relationship with others, you must set limits on yourself. These limits will allow you to avoid behaviors that harm you, so you won't be asking too much of yourself. Be honest with yourself and determine what you can and cannot do, and also what you don't want to do.

- Be aware of your needs. You have the right to meet your needs like others do, which means you don't have to allow them to dictate to you what you can do with your time and what you need to devote your energy to. Prioritizing yourself is not a sin. Based on your needs, determine how much, how, where and to what extent you can help.

- Take some time to think. You don't have to take a step back to learn how to say no. Establishing a psychological distance will allow you to weigh the pros and cons of the commitment you are about to make. Therefore, when someone asks you for something that requires a lot of effort, don't answer immediately, tell them that you need time to reflect on the subject. This way you will not set yourself a trap and, if you conclude that you cannot do what they ask of you, you will not have given your word.

- Focus on what you give up. It is very difficult to remain firm within the limits you have established when a part of you thinks that helping that person is the "right thing" to do, when a part of you is telling you that you are a "bad person" because you only think about yourself . To counter this thought you have to focus on what you will have to sacrifice, on the things you will have to give up by saying "yes".

- “Helping” doesn't always help. Making life easier for others isn't always a help. Sometimes we think that saving others problems, difficulties and conflicts is positive and “right”, but in this way we could also take away an opportunity for growth. By preventing that person from facing life's problems, we may also be preventing him from developing his resilience.

The key is in balance. In being aware that there is a time to say yes and another to say no. Philosopher Ayn Rand reminds us that "the principle that those who are in an emergency must be helped cannot extend to the point of considering that all human suffering is an emergency and transform the misfortune of some into an emergency. mortgage on our life ".