Do dogs realize we are talking to them? 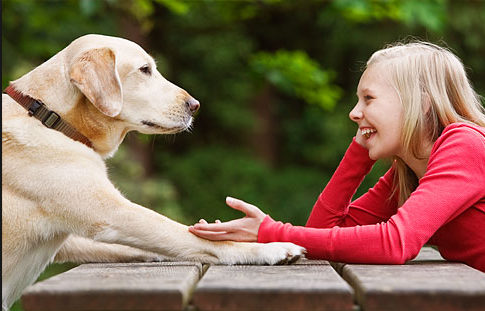 Between the sixth and the eighteenth month, babies begin to follow the eyes of others with their gaze. In fact, it's something we all do involuntarily. If, while we are talking to a person, he / she moves his gaze in a certain direction, we will tend to do the same.

But this reaction is not always found, it is essential that there is a direct relationship between the two people, in such a way that one of them captures the attention of the other and invites them to look in a certain direction. Furthermore, it has also been shown that when there is an emotional bond, this phenomenon is even more intense.

Well, now a group of Hungarian researchers has decided to use the phenomenon of visual tracking to try to answer the question that anyone who has a dog has asked himself at least on one occasion; do animals know this when we are talking to them?

These researchers worked with 16 adult dogs by showing them a video showing a person standing between two empty vessels. These people greeted the dog and then moved their gaze to one of the vases. Meanwhile, the researchers recorded the dog's eye movements.

The trick was in the person's greeting. In the case of ostensive communication, the classic way of greeting someone was used; that is, raising your voice, making eye contact, and using a positive tone. In the other case, a non ostensive communication was used; that is, the actor used the same words, but spoke in a firm voice, without inflection, with a serious tone and avoiding eye contact.

If a person were to evaluate the two types of greeting, he would undoubtedly say that the first sequence includes the desire to establish direct contact, the second does not. Therefore, we ourselves would be more likely to follow the actor's gaze in the first case because this has managed to establish a bond. But ... what about dogs?

The results showed that, after the greeting that included eye contact and a high-pitched voice (ostensive communication), dogs were also more likely to follow the actor's gaze. What does this mean?

Which, in some ways, dogs are able to detect (mainly through eye contact and changes in the tone of voice) when one is addressed. Therefore they react positively and establish a much closer relationship.

In fact, this is not the first study showing that dogs are very sensitive to the direction of human gaze and that this has great reference value, which is not surprising given that dogs have been found to have intelligence and a social skills quite similar to those of a two or three year old child.

So the next time you talk to your dog, look him in the eye and change the tone of his voice slightly. He will know that you are speaking to him even if he will not understand what you mean to him.

Marriage conflicts are more harmful than smoking and cholesterol ❯

add a comment of Do dogs realize we are talking to them?