Marriage conflicts are more harmful than smoking and cholesterol 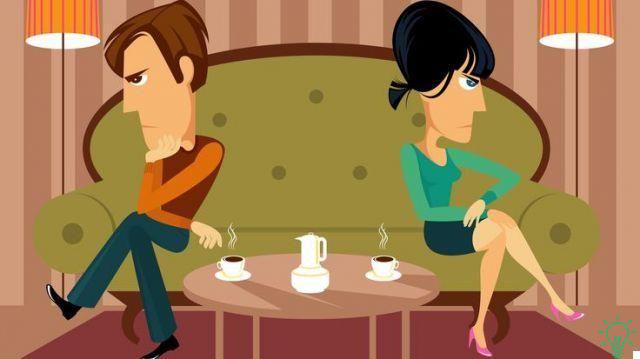 Interpersonal relationships are the greatest source of satisfaction, and also of problems. The couple relationship, in particular, is a source of enormous joy and support in difficult moments, but when it turns into a conflictual relationship it generates concerns that, in the end, affect not only our psychological balance, but also physical health, increasing the risk of developing serious diseases.

If your partner is happy, you will be healthier too

In 1858, an English epidemiologist named William Farr devoted himself to studying what he called the "marital situation" of the French and to do so divided the population into three categories: married, single and widowed. He then examined the archives where the dates of birth, death and marriage, and the mortality rate were recorded. In this way he came to the conclusion that, at least at that time, married people enjoyed longer and healthier lives.

Recently, Michigan State University psychologists published a study summarizing the results of six years of research. During that time, 1.981 couples were monitored and it was discovered that the happiness of one of the two members of the couple was linked to the health of the partner. That is, if your partner is happy, you are more likely to be in good health.

Of course, these aren't the only studies that have highlighted the relationship between health and satisfaction in married life. In fact, it has also been found that, as a general rule, married people are less likely to undergo surgery and die from cancer, and run a lower risk of suffering from dementia.

Of course, when we have a partner, especially if the relationship is good, we receive more support and, of course, we experience less stress, because we share the burden of problems. But simply having a partner doesn't improve our health. More and more studies suggest that when the relationship is stormy and troubled, the psychological balance and health of the two deteriorate rapidly.


When the couple relationship kills

Researchers at Michigan State University analyzed data from 1.200 people over the age of 50, keeping in mind indicators such as smoking and cholesterol levels, and also assessed the quality of their marriage. In this way they discovered that conflicts in the couple relationship were the antechamber of cardiovascular problems, and in some cases they were a much more reliable predictor of smoking or cholesterol. Interestingly, women suffered from this negative effect more than men. Therefore, it has come to be stated that marital conflicts can be much more damaging to the heart than smoking or having high cholesterol.

Several epidemiological studies also suggest that an unhappy marriage increases the risk of suffering from heart attacks and cardiovascular disease. In fact, a research conducted with 300 Swedish women found that the risk of suffering from a heart attack is multiplied by 3 when there are conflicts in marriage. Interestingly, work-related stress does not pose such a high health risk.

Why are marital conflicts so harmful? What is their impact on the organism?

To find the answer, we must go back to a series of studies carried out by researchers at Ohio State University. One of them involved 76 women, half of them married and the other half divorced or about to separate. Through blood tests it was found that those who continued to endure a difficult relationship or were emotionally linked to a complicated relationship showed a weaker immune system response.

These researchers have gone a step further by discovering what happens in our bodies during a fight with a partner. To do so, they recruited 42 married and apparently happy couples. The experiment was conducted in two phases, on the first day the couple talked for half an hour about arguments that stimulated attitudes of support, the next day about issues that generate tensions and conflicts. As people talked, a special device was used to generate small blisters in the skin of the participants' arms.


The goal was to see if support or misunderstanding affects recovery times. And so it happened. When couples argued, the wounds took an extra day to heal, compared to those generated during a pleasant conversation. Additionally, the wounds of some couples who exhibited particularly high levels of hostility while arguing took an extra two days to heal.

These data suggest that the stress we experience during a couple discussion can be very high, resulting in a series of changes in our organism that, if maintained for a long time, will cost us dearly, in physical and psychological terms.