Nobody forbids gourmets to have lunch and dinner at the restaurant whenever they wish. Whether it's for work, a romantic date or an evening with friends, it is nevertheless a good rule to respect some rules in order not to make your weight rise too much.
First of all, attention must be paid to two fundamental aspects which are the quantity and quality of the foods that are eaten. The two things do not always go hand in hand and the consumer, also considering the economic aspect, generally seeks a good compromise between the two. 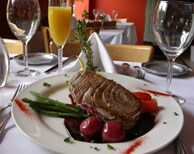 Evaluating the amount of food we eat is fundamental even if often the appointment with the restaurant is a matter of pleasure and for this reason we do not pay too much attention to the line.
A first course, a second course, a dessert and a little wine can easily make us reach 1500 calories. If we order a pizza and a dessert, things are certainly not going any better since even in this case, 1000 calories are easily reached.
One meal of this kind per week is enough to nullify the calorie restriction of the previous days. At this point the choice is up to the consumer who, if he does not want to get fat, either reduces the frequency of appointments with the restaurant or avoids food excesses. There would actually be another choice and that is to practice a little sport during the week in order to indulge in some extra dietary luxury.
To keep the quantitative aspect under control, it is advisable not to overdo the various portions and eliminate the dessert at the end of the meal which in the best cases leads us to take at least 400 Kcal more. The first courses are often considered the main culprits of the caloric excess but the second courses must also be checked.
First courses: first of all it is good not to overdo the quantities. Avoid those cooked with added butter or those that are too greasy. If you order only a first course it is good to try to prefer those balanced in the distribution of the various nutrients since they are too often unbalanced in favor of carbohydrates. Examples of balanced first courses are: spaghetti with chicken, olive oil and peppers, pasta with tuna, olive oil and tomato, minced and vegetable pasta. Instead, they are unbalanced because they are too rich in carbohydrates and poor in proteins, such as: pasta with oil, pasta with tomato sauce, orecchiette with turnip greens. Even the addition of sauces that are too high in fat as occurs for pasta all'amatriciana or carbonara unbalance the dish, also raising its caloric content.
Seconds: choose the leanest cuts of meat. The boiled meats are excellent, grilled meat is a good choice but not perfect due to the carcinogenic substances that develop at the high temperatures to which it is subjected. The same goes for fried foods, which have the additional disadvantage of being high in calories. We attribute a fair score to roasts as long as you use cuts that are not too fatty and don't overdo it with seasonings.
Fish is more often than not a more than healthy choice. Also in this case there are more or less fatty dishes but we recommend choosing it based on individual preferences, limiting yourself only to not exceeding too much with the quantities. In fact, the polyunsaturated fats contained in fish, even if they provide the same calories as the other types, help to keep cholesterol under control.
At the restaurant try to order:

Quality. Not all that glitters is gold. Or if you prefer it is not all good what looks good. Preservatives, artificial flavors and additives in general are increasingly used to improve the characteristics of products. With some exceptions, home-made foods are better from a qualitative point of view than pre-cooked and / or frozen ones. Unfortunately, however, even the restaurants have a whole series of ingredients that are not really healthy to enhance the flavor of their dishes.
Both in the industrial and in the catering sector there are controls on the quality of the food and ingredients used. If on the one hand we cannot trust the advertising we see on TV but we must carefully read the ingredients and nutritional values ​​shown on the label, on the other hand a higher cost does not always correspond to a better quality of the ingredients (even if we cannot think that a menu including first second course, water and coffee at 10 euros has been prepared by carefully choosing the best ingredients).
In any case, we can ask the waiter or if possible the chef for information to evaluate the seriousness of the place. For example, if the chef also offers diet menus or for people with particular food intolerances, the impression we will get will certainly be good.
If the restaurateur emphasizes the authenticity of the ingredients proving to have a good food culture, in all likelihood it is a place that is also attentive to the dietary and qualitative aspect of its dishes.
Instead, it is better to stay away from super crowded places that focus on quantity, on price containment and which only offer "binge" menus. In these cases the love, the care in the preparation and the choice of ingredients is necessarily reduced to a minimum.