Diet and Salmon: Benefits and Controversies

Salmon is a typical fish of some subarctic and arctic areas. Its breeding, however, can also take place in more southern areas, although it is certainly NOT a characteristic animal of central-southern Europe. 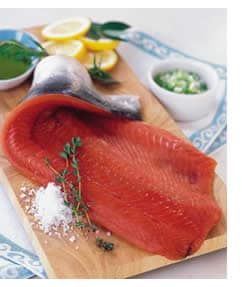 The fish colonizes salty, fresh and brackish waters, and makes some migrations (2-3) from the sea to the rivers in order to reproduce.
Salmon, intended as a food, belongs to the 1st Fundamental Group of Foods. From a nutritional point of view, its consumption is aimed at achieving the recommended rations of: proteins, mineral salts, some B vitamins, vitamin D, vitamin A and essential fatty acids.
In the diet, salmon could be consumed on a "weekly" basis. A portion of 150-250g, at most every 2-3 days, is in fact sufficient to satisfy the basic criteria of a healthy and correct diet. In this regard, it must be specified that it is always advisable to maintain a certain variability of the diet; better, therefore, to avoid consuming only salmon, excluding other fishery products, since it too (like any other food) has some aspects that are not entirely positive or controversial.
It should then be added that isalmon is a very high fat food; therefore, it is recommended to carefully evaluate the portions (which must be related to individual needs) and to avoid, especially in the case of overweight, its contextualization within recipes rich in seasoning fats (oil, cream, etc.).

Salmon as a Food: How to Eat It?

Salmon is a food that lends itself to various types of consumption.

In the "fresh state" its meat is delicate and pleasant (where "fresh" means "NOT processed" with preservation methods other than freezing); there are also other products obtained through alternative systems, among these, the most characteristic is thesmoking (accompanied by a light salting), but today the conservation of canned salmon by means of a preserving liquid (brine). Less consumed (and less valuable) is salmon in the form of pate.
What many ignore is that salmon are NOT consumed only the muscle and fat, or what is commonly understood as "meat". Her eggs, especially in certain places, they are considered a real delicacy. But be careful! Those who expect a more or less "anonymous" taste, similar to that of lumpfish roe or flying fish, or those accustomed to the delicate flavor of Russian caviar, might be disappointed; in fact, salmon roe are distinguished by an "explosive" scent of omega 3, so intense that it dominates any other ingredient in the dish. Even certain offal of the salmon they seem edible and all in all pleasant to the taste; the liver is certainly the best known. Like the aforementioned organ of cod, blue shark and other cold sea fish, salmon liver is also very rich in omega 3 and, together with other parts of "waste" in the trade of related meats, is often used for the formulation of food supplements. By itself, the salmon liver it is a fairly simple product to cook but, since it is an organ notably exposed to certain contaminants, if intended for human consumption, it should be obtained from controlled animals, ignoring instead the creatures raised without respecting the disciplinary regulations.
Returning to the meat of salmon, we briefly mention the most popular recipes in our country which, to be honest, does not boast a real culinary tradition specific to this food. Fresh salmon (even defrosted), especially in recent years, is often incorporated into raw fish recipes. Alone or in more or less exotic mixed salads, it is now a fundamental ingredient of Japanese sushi (sashimi, nigiri, oshizushi, futomaki etc.), in which it is also possible to combine it with foods that contain eggs (ikura). Always raw, salmon meat lends itself to the production of carpaccio or tartare from fresh, smoked or marinated fish. As far as cooking systems are concerned, on the other hand, steam and oven cooking are more common, with or without the use of salt crust.
There are two different kinds of smoking, one industrial (perhaps also of a chemical type, as for certain cured meats), which also includes a first salting and a subsequent vacuum, and another housewife. The latter (see the video recipe) can also be done inside the home oven; it requires a light initial salting and is carried out "cold" (with the oven off, in which steaming wood is inserted), which is why it does not greatly extend the shelf life of the food. On the other hand, it allows you to customize the taste based on the type of wood used.
When it comes to marinating, there are several different recipes. Some are based on the dehydration of salmon by salting (with a little sugar) and the subsequent rehydration in flavored suspensions (water, citrus juice, herbs, oil, etc.); others directly exploit flavored liquids with an osmotic power much higher than that of meat (generally with very high percentages of sugar and salt), in order to "firm" the tissues while they are flavored.
In any case (since it is a food to be eaten raw) we remind you that before smoking or marinating it is always necessary to apply the lowering of temperature to avoid any risk of parasitosis.
If fresh, smoked or marinated salmon meat leaves room for culinary imagination, there isn't much to specify when it comes to canned salmon and pate salmon. The latter is often used in the formulation of canapes, snacks, appetizers and sandwiches, while the one in a jar goes well with dry pasta as a filling for tortelli or as an accompanying sauce.

Quality and Controversies of Salmon in the Diet

Let us now focus on the quality of the raw material available on the market. There are various species of salmon, but in your country (and also in the rest of Europe) Atlantic salmon (binomial nomenclature: Salmo salar) is mainly consumed.

Most of the salmon on the domestic shelves comes from foreign aquaculture and arrives in your country in the form of frozen, to be defrosted only before retail. There is therefore no valid reason for buying it "at the market" rather than in a freezer cabinet (where, moreover, it would cost even less). The only detail that REALLY makes the difference between "salmon and salmon" is where they come from farmed fish or caught fish. Highlighting the fact that aquacultures are NOT all the same (some are distinguished by the high quality of the feed and the low density of population), it should be remembered that the salmon caught (or rather called "wild") is qualitatively better than the other. Nowadays, the composition of the feed can be varied on the basis of the product to be obtained, also managing the nutritional concentration and the pigments responsible for the color of the salmon; this latter characteristic can also be enhanced by limiting the presence of crustaceans, instead naturally present in the diet of wild salmon (very rich, in fact, in these molecules). In practice, the meat of these fish could be "colored" by supplementing the feed with pro vitamins of type A, a bit like the salmon trout. Remember that the latter is NOT a hybrid species, but a rainbow trout with pink meat obtained by feeding the fish with flours particularly rich in carotenoids.
Unfortunately, wild salmon fishing is NOT sufficient to meet market demand, which is why farming is completely necessary; nevertheless, even this measure does not protect the environment from the ecological damage inflicted by the super-demand for salmon. Fish farms, in fact, also require the presence of small fish and crustaceans which are then fished, an activity that rather significantly weakens the foundations of the marine food chain.

Role of Salmon in the Diet

Fresh salmon is a product that often appears in diets, regardless of whether they are nutritional therapies or not. As we will see below, however, it is not adaptable to any diet; in fact, due to the high caloric value, it could be contraindicated in the diet of sedentary overweight subjects. Its most interesting dietary application concerns the diet against metabolic diseases (mainly dyslipidemia and hypertension). The latter application is due to the particular nutritional value of salmon, which is distinguished by its richness in essential fatty acids of the omega 3 group (in particular EPA and DHA) and astaxanthin (carotenoid). As is now well known, the lipophilic molecules of the omega 3 group cannot be produced independently by the body, therefore they must necessarily be introduced with food. Their metabolic effect (in addition to the energetic one) is bivalent: they are precursors of some "good" eicosanoids and constituents of the cell membrane; moreover, it seems that their presence lowers cholesterol, improves the LDL / HDL ratio, lowers hypertriglyceridemia, reduces hypertension, fights systemic inflammation, prevents the onset of thrombus to the advantage of cardio-vascular risk and reduces complications related to type 2 diabetes mellitus.astaxanthin, on the other hand, it is a pro vitamin A with an antioxidant and coloring effect; it is the molecule responsible for the pink color of salmon meat, which plays a metabolic role of protection from free radicals and a beneficial skin function against sun burns.
It is curious to learn that among the various omega 3 supplements there is also the so-called salmon oil (for humans and animals). In addition to the well-known chains of essential fatty acids, this orange oil (marketed in collagen pearls) is promoted by virtue of the presence of antioxidant astaxanthin and phospholipids (most likely obtained from the nervous tissue of fish). The method of extraction of salmon oil is little known to the public, but it cannot be excluded that it involves the recycling of certain scraps obtained from the marketing of the meat.
On the other hand, it should be remembered that salmon falls into the category of oily fish, therefore it constitutes a food with a high caloric value. This means that any constant and significant food abuse (perhaps associated with other "questionable" behaviors), could favor the onset of overweight. Let's not forget that among the various causes of onset for the metabolic diseases mentioned above (with reference to the positive effects of omega 3), in addition to individual predisposition, a sedentary lifestyle and an unbalanced diet, there is also overweight itself. In light of what has been said so far, it is certainly not difficult to understand why salmon rarely appears in diets against obesity. To be precise, this food could be contextualized in a more or less effective way even in these nutritional schemes, having however the foresight to reduce the oil as an overall condiment; however, by respecting the criterion of "applicability" of the portions (that is, weights at least sufficient to confer a sense of satiety), including salmon in the diet of a sedentary subject would become somewhat complicated and not always justifiable.
Furthermore, let's not forget that salmon is a food rich in protein with High Biological Value, that is, with a rather good pool of essential amino acids and in considerable quantities; this aspect is particularly appreciated by sportsmen and bodybuilders.
As regards the I left minerals, salmon meat is fairly rich in iron, potassium and phosphorus, while as regards the Vitamins, Pro Vitamin A (Astaxanthin), Vitamin D (Cholecalciferol), Vitamin PP (Niacin) and Vitamin B1 (Thiamine) are abundant.
For subjects without complications, salmon is always well relevant in the diet and in any form, while for pregnant women it needs to be cooked to further avert the risk of microbiological contamination.

add a comment of Diet and Salmon: Benefits and Controversies