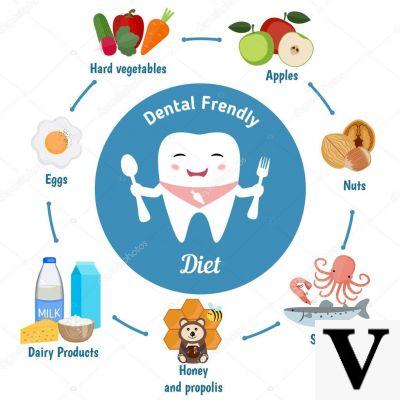 The teeth are hard appendages positioned inside the oral cavity; they are considered real organs, as they are composed of living tissue, vascularization and nerve endings. Their main function is to grasp, chop and chew food; secondly, they also play the role of phonetic modulators.
In humans there are 28 or 32 (based on the presence or absence of third molars, called "wisdom teeth") and their structure is organized as follows: the portion that emerges from the gum is called the crown, while the one hidden by it is that settles in the bone is called the root. Externally, only on the crown, the enamel (hard tissue) is placed; beneath it, the tooth is formed by a layer of dentin, in turn covered by a thin layer of cement. In the innermost loggia the pulp is distinguished, in which the supply vessels and the sensory nerves circulate.

The relationship between teeth and human health is quite close and articulated.
First of all, the teeth are essential for starting the digestive process; without them, food cannot be chewed and soaked in saliva (which contains the very first digestive enzymes). Correct chewing reduces the workload of the stomach (especially following the ingestion of meat) and decreases the chances of diverticulitis. This latter disorder, based on the pre-existence of intestinal diverticulosis, can be triggered by the settlement of coarse solid food residues (because NOT properly chewed) inside "pockets" (diverticula) formed between the mucosa and the underlying vascular channels (a sort invagination or hernia). On site, these residues ferment and trigger a more or less severe inflammatory process (diverticulitis = inflammation of the diverticula).
The teeth, or rather the clenching of the mandible over the jaws, also play a rather important role in maintaining posture. It may seem strange but, if the upper and lower arches do not match, an alteration of the stabilizing muscle contractions can occur, with repercussions (of varying severity) on the position of the spinal column.
Last but not least, teeth can represent a direct source of access for bacteria to the bloodstream. Rather rare, but still possible, are septicemic infections originating from a very banal (but neglected) dental caries (which we will discuss in more detail in the next paragraph). We remind you that, although caries is a rather common and (generally) NOT serious disorder, septicemic infection can instead be so serious as to lead the individual to death. Some studies have even linked poor oral hygiene with an increased risk of developing cardiovascular disease, such as heart attack.

If the teeth represent a determining factor for the nutrition of the human being, even the diet can facilitate or compromise the integrity of these organs. The most frequent complication is certainly dental caries. This is due to the combination of several factors; it is defined as the erosion of the dental enamel which, if not treated, leads to bacterial contamination first of the dentin and then of the dental pulp. In the latter case, it is common for the infection to lead to the formation of an abscess, or a pocket of pus; the abscess can give rise to the aforementioned septicemic infection.
Enamel erosion mainly results from 3 factors:

If for the first two points it is not possible to intervene, for the third there is a series of measures aimed at promoting greater preservation of the teeth. These acids, capable of attacking dental malt, derive both from the natural composition of the food and from the physiological bacterial fermentation of the oral cavity; the predominant strains are: streptococci, lactobacilli, corynebacteria, actinomycetes, staphylococci and some anaerobes. Among all, it seems that those most responsible for acid production are the lactobacilli. The favorite substrate of these microorganisms is certainly that of carbohydrates, in particular simple or not very complex. It is therefore necessary to keep in mind that:

As for the acids in food, however, they are mainly present in acidic products. This is the case of malic acid (especially in apples), ascorbic acid (vitamin C), citric acid (citrus fruits), tartaric acid (grapes, wine, etc.), phosphoric acid (coca cola), acetic acid (vinegar), lactic acid (yogurt) etc.
Having a corrosive action on the enamel, some of these acids present in the diet also have a whitening effect. Obviously, their use for whitening (lemon juice, apple vinegar, etc.) must provide for a correct dilution and the right method of application. Making excessive use of it would greatly increase the likelihood of severe enamel erosion.
From here, some professionals also advise NOT to use the toothbrush before 20-60 'from the end of the meal. This is due to the fact that the acids contained in food are fully erosive and the application of a mechanical friction would increase their demineralization capacity; therefore, it is better to allow sufficient time for saliva to buffer the pH of the mouth.

It should be remembered that the chemical composition of dental enamel is almost entirely based on calcium (similar to bone) and that fluoride plays a fundamental role in its fixation process. It is therefore deducible that a diet lacking in these minerals, in addition to compromising the skeletal density, can negatively affect the maintenance of the enamel. NB. Fluoride seems to have a protective action on the teeth even for topical use!
For the integrity of the gums, however, it is advisable to make sure that the diet is NOT deficient in: magnesium, zinc, iron, manganese, selenium, vit. C and vit. E. The gums line the lower portion of the tooth, the one not provided with enamel; these, if set back, promote the settlement of food residues and expose the most delicate points of the tooth to bacteria and food acids. A little research on gum health has shown that consumers of good portions of yogurt, or dairy products containing lactobacilli, seem less affected by gum disease; in practice, although lactic acid can be erosive for the enamel, the presence of PHYSIOLOGICAL bacteria tends to preserve the tissues from the harmful action of pathogenic microorganisms (similarly to what happens in the intestinal mucous membranes and reproductive organs).
Finally, remember that, for "physical" or consistency reasons, certain foods favor the onset of dental caries more than others. This is the case of semi-liquid and / or sticky products (e.g. syrups, toppings, candies, pasteurized honey, hazelnut cream, etc.) and those that are mushy or that become pulp immediately after chewing ( jams, crackers, biscuits, rusks, etc.); these, adhering and leaving more residues on the teeth, favor the proliferation of bacteria and the formation of acids. On the contrary, harder foods (hazelnuts, almonds, walnuts, carrots, fennel, celery, etc.) favor the USE of the teeth and leave less residues that can be fermented by bacteria in the oral cavity.