Dandelion honey: how to prepare the vegan alternative to honey at home

Il dandelion honey (or dandelion syrup) is an excellent solution for vegans, it is not produced by bees, but can be easily prepared at home with dandelion flowers and sugar. Let's find out how ...

Dandelion syrup is a great substitute for the more traditional honey and with a surprisingly similar flavor. The consistency is less full-bodied than most types of honey, but it has an aspect that is very close also in terms of color.

If you intend to try it, the ideal is to collect dandelion (or dandelion) flowers in the lawn, of course, if you are sure that they have not been added with chemicals.

Dandelion honey is actually a syrup that is obtained precisely from dandelion, a plant with exceptional therapeutic qualities. Its main function is to purify the blood and liver with a strong detoxifying effect.

Dandelion is useful in stimulating the production of bile, counteracts constipation, lowers cholesterol and has many other properties. Certainly a syrup made with a lot of sugar like this slightly reduces the healing abilities of the active ingredients of the plant which, to be best used to exploit its benefits, is best taken in the form of an infusion, unsweetened juice or supplement.

However, dandelion honey is useful as an alternative to honey for those who do not consume food of animal origin since it is very similar to it in texture and taste.

How to make dandelion honey

To prepare dandelion honey at home you will need: 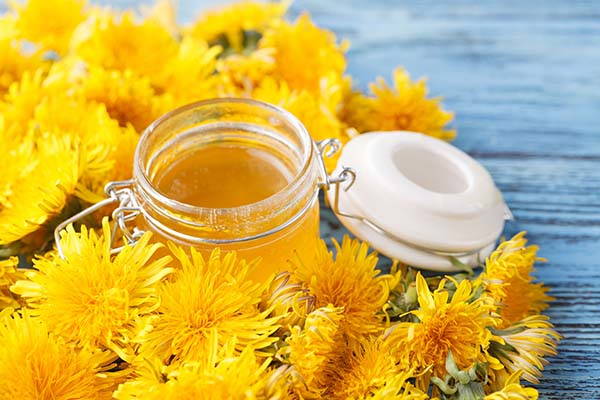 Collect the flowers, preferably in the morning, and immerse them in cold water for 5 minutes discarding the center of the flower and the stem, rinse them again and put them in a pot. Then add the water and put it on the fire, simmering for 30 minutes. Then remove from the heat and leave to infuse all night taking care that the flowers are well placed under water. The next day, filter and squeeze the liquid with the help of gauze.

Put the pot with the infusion back on the gas over low heat, add sugar and lemon and boil very slowly until the desired consistency (similar to that of honey) is reached. It will probably take a few hours.


Once the fire has been extinguished, the dandelion honey can be poured into glass bottles or jars to be allowed to cool and then refrigerated.

How to use it

Dandelion honey can be used to spread on top of toast or rusks, to sweeten drinks, cookies or cakes, and in all the other ways you would use honey.

On the dandelion read also:

Audio Video Dandelion honey: how to prepare the vegan alternative to honey at home
Millet: 10 quick and easy recipes ❯

add a comment of Dandelion honey: how to prepare the vegan alternative to honey at home