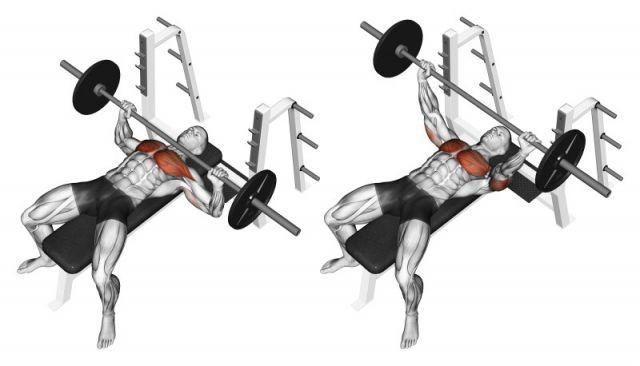 The starting position sees the athlete lying on his back on a flat bench with the buttocks, upper back, shoulder blades and nape always in contact with it and with the feet firmly resting on the ground vertically below, or behind the knees, but never in front. The hips are abducted and the lower limbs push on the floor in a balanced way to ensure stability in the position. The flexors of the spine are in a position of lengthening, but in isometric contraction, while the extensors are in shortening; both work in balance to ensure continuity between the lower and upper limbs. The shoulder blades are adducted, neither depressed nor elevated. The one just described is nothing more than the position of strength of the back, so it is perfectly normal that at the level of the physiological lumbar lordosis, there is no contact with the bench. The arms are straight, the shoulders flexed to varying degrees, with a maximum of 90 ° (arms perpendicular to the ground) and the handle of the barbell is always prone with the thumb. The distance between the hands can vary from a few cm wider than the distance between the shoulders, up to 81 cm (maximum limit allowed in powerlifting competitions). As the distance between the hands varies, a different degree of shoulder flexion and a different spatial positioning of the barbell correspond. The starting position with a relatively tight grip therefore sees the athlete with the shoulders slightly less flexed in the sagittal plane and the barbell over the upper abdomen / lower chest, compared to the starting position with a wider grip in which the shoulders can reach a degree of flexion in the sagittal plane close to 90 ° thus positioning the barbell over the upper part of the pectoral. On the transversal plane, on the other hand, as the grip widens, the degree of transverse flexion of the shoulder is reduced and vice versa. The execution consists in lowering the barbell on the vertical plane until it is in contact with the chest. This movement must draw a straight line segment exactly perpendicular to the bench. At the end of the barbell descent, from a lateral view the forearm must be perpendicular to the ground. At this point, the athlete pushes the barbell upwards making it retrace the exact trajectory he traced during the descent, until he returns to the starting position.