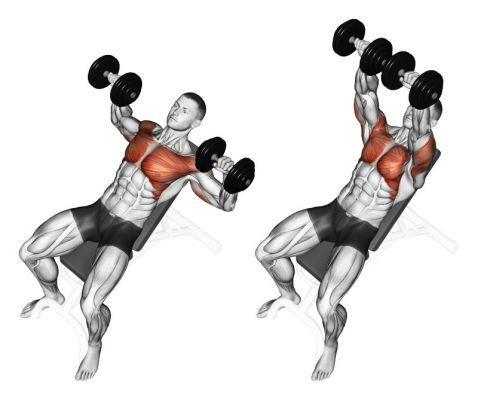 Inclined bench press with dumbbells is a multi-joint exercise / accessory

The starting position sees the athlete sitting on a bench inclined at 20 ° and 45 °, with his back in his position of strength, legs apart and feet firmly resting on the ground behind the knees to favor the maintenance of the three natural curves of the back and to support weight more effectively. The elbows are flexed, the wrists straight and the shoulders adducted and extra-rotated so that the elbow, wrist and dumbbell are in exactly the same vertical plane from a side view. The dumbbells are held at the same height as the sternum with a grip that can be prone or neutral; the latter is more correct and particularly recommended when the dumbbells are bulky and heavy, which therefore if held with a prone grip, would force the athlete to keep the elbows less flexed than it would take to have the forearms perpendicular to the ground from a frontal view, resulting in unnecessary effort on the part of the elbow flexors to hold the handlebars and reduction of the descent movement. The execution consists of pushing the dumbbells up on the vertical plane perpendicular to the floor (not the bench) on which they were lying before starting, thus trying to draw a segment of a straight line and not a curve. During the push, the shoulders flex in the sagittal plane and abduct in the longitudinal plane, while the elbows extend and the shoulder blades begin to rotate upward in the last third of movement. The execution ends with the full extension of the elbows and just before the arms come to be perpendicular to the ground. It is also possible to perform this exercise in a unilateral version with consequent greater stimulation of the stabilizers of the spine. During the whole execution of the exercise it is advisable to place part of the weight on the feet. Correct execution of this exercise requires good shoulder mobility in the first third of the movement to maintain the position described above.

Muscles involved in the exercise Incline bench press with dumbbells


Action
Upper scapular rotation
Audio Video Incline bench press with dumbbells
Exercise in Pregnancy: Which and How to Do It Safely ❯

add a comment of Incline bench press with dumbbells