L'alpha-fetoprotein (AFP) is a glycoprotein substance with functions similar to those of albumin, synthesized mainly during fetal life by the yolk sac and the liver.

After birth, alphafetoprotein levels begin to drop significantly, until they reach - within 12/24 months - the characteristic values ​​of a healthy adult (less than 5 ng / mL). 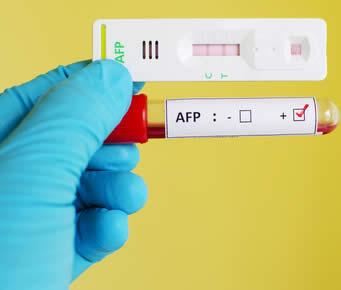 Outside the gestational period, the blood assay of alphafetoprotein is performed to evaluate the evolution of some tumors. It is therefore not a test with diagnostic purposes, but a complementary examination, which provides an indication of the evolution of the tumor processes over time, also in relation to the therapies undertaken.

Alpha-fetoprotein is a “marker” tumoral, that is, one of those substances that can be found in increased quantities - in the blood, urine or other body fluids - in the presence of some neoplastic processes.
AFP is found in maternal serum - hence its name - starting from the fourth week of pregnancy. In particular, this glycoprotein is produced by the developing fetus in its liver, yolk sac and gastrointestinal tract. AFP peaks in maternal blood at the 13th week of gestation, then gradually decreases over the following months.
Immediately after birth, the AFP in the newborn stabilizes at the normal level of an adult and always remains low, except in the case of a state of pregnancy, liver disease o some forms of cancer.

The test measures the concentration of alphafetoprotein (AFP) in the blood. In healthy children and adults, AFP is normally present in very small quantities.
High concentrations of alpha-fetoprotein can be produced by certain types of liver, testicular and ovarian cancers. This feature makes the protein useful as a tumor marker in supporting the diagnosis of these neoplastic processes.
The parameter is also useful for monitoring the trend of chronic liver disease, such as cirrhosis, hepatitis B and hepatitis C.

When is the test prescribed?

Liver damage and some neoplastic processes can significantly increase AFP concentration. Your doctor may order this test, along with other imaging tests, to try to detect liver cancer when it is still in its infancy and can be treated.
Examination of alphaphetoprotein is indicated to aid in the diagnosis of liver, testicular and ovarian tumors. In the presence of one of these malignancies, the test is ordered at regular intervals to aid in monitoring during or after treatment.
The AFP examination may also be recommended in the presence of cirrhosis o chronic hepatitis. In fact, alphaphetoprotein is produced every time the liver cells are regenerated. For this reason, AFP is consistently elevated in chronic liver disease.

Typically, a healthy adult has a serum alphafetoprotein concentration of less than 10 ng / mL.

The finding of levels higher than 500 ng / mL constitutes a rather probable diagnosis of hepatocarcinoma, as such high values ​​are almost never observable in other pathologies (except germ cell tumors or with liver metastases).
Alphafetoprotein monitoring can also be useful as a screening test for early diagnosis in the population at high risk of liver cancer, although its values ​​tend to be already high in patients with chronic liver disease. Furthermore, in the postoperative period or after other therapeutic interventions, the alphafetoprotein dosage becomes very useful to recognize a possible relapse.

Increased amounts of AFP may indicate the presence of germ cell cancer in the testes or ovaries (teratocarcinoma).
Additionally, AFP levels can be high for conditions and factors unrelated to liver disease, including:

High levels of alphafetoprotein are also recorded during pregnancy and tend to increase further if the fetus has neural tube closure defects, such as spina bifida.

Alphafetoprotein values ​​can be low in case of:

In pregnant women carrying fetuses with Down syndrome, the serum levels of alphafetoprotein and unconjugated estriol tend to decrease, while those of human chorionic gonadotropin and inhibin A increase.


How it is measured

The alphafetoprotein test is a laboratory test that involves taking a simple blood sample from a vein in the arm.

Fasting for at least 8 hours is required for AFP analysis to avoid food interfering with the result.