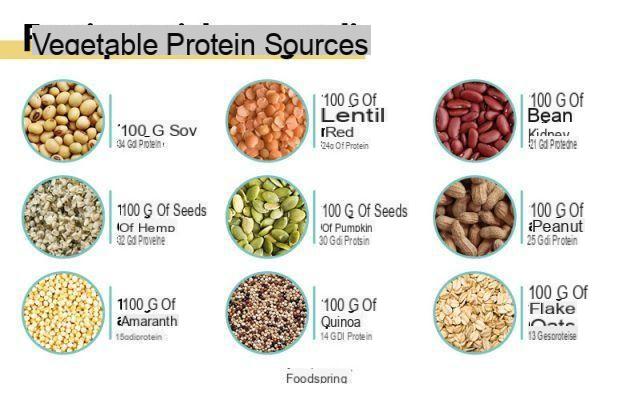 Before talking about vegetable proteins, let's review some very important concepts to establish the quality of a protein source.

What is there to know

Biological value (VB): represents the quantity of nitrogen actually absorbed and used net of urinary and faecal losses. The reference protein is that of the egg which has a VB equal to 100%

Protein efficiency ratio (PER): indicates weight gain in grams for each gram of protein ingested (3,1 for milk; 2,1 for soy)

Essential amino acids (AAE): The term essential indicates the body's inability to synthesize these amino acids from other amino acids through biochemical transformations. There are 20 amino acids involved in protein synthesis and among these 20 eight are essential [leucine, isoleucine and valine (BCAA), lysine, methionine, threonine, phenylalanine, tryptophan] during growth two other amino acids, arginine and histidine become essential

Limiting amino acid: represents that essential amino acid present in the lowest concentration compared to the requirement, this deficiency prevents optimal use of the other amino acids for protein synthesis.

Cereals, for example, are deficient in tryptophan and lysine, an essential amino acid whose deficiency can lead to a deficiency of vitamin B3 (niacin). Legumes, very rich in decent quality proteins, are instead lacking in sulfur amino acids (methionine and cysteine) important for the growth of hair, hair and nails and for the synthesis of glutathione, a powerful antioxidant able to protect our cells from oxidative stress (free radicals).

However, by correctly combining different vegetable proteins, even alternating ones and not necessarily in the same meal, it is possible to compensate for the lack of various limiting amino acids. In this case we speak of mutual integration (or protein complementation).


Pasta and legumes is an example of an excellent combination since the amino acids that pasta is lacking are supplied by the beans and vice versa.

In any case, it should be noted that all the concepts expressed so far must be interpreted rationally:

Therefore there are no particular contraindications in consuming mainly food of plant origin as it happens during the summer period. However, it is important that the diet includes the consumption of a wide class of foods of plant origin (dried fruit, vegetables, legumes, etc.) but also of some animal foods (eggs, milk, meats, etc.). In fact, an exclusively vegetarian diet, even if sufficient from a protein point of view, could be deficient in vitamins (B12) and minerals such as iodine, iron and calcium, and essential fatty acids.

Enter the vegan recipes section and discover many tasty alternatives to animal proteins: