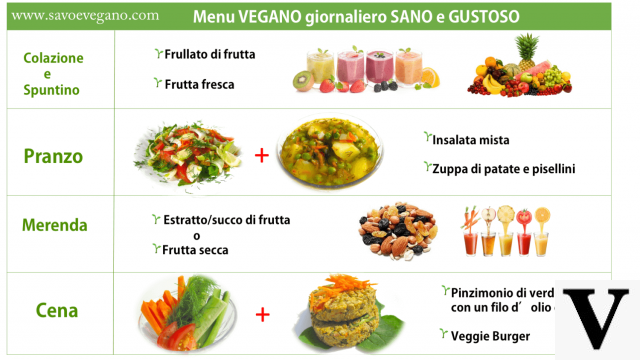 The following guidelines serve purpose exclusively information and are not intended to replace the opinion of professionals such as a doctor, nutritionist or dietician, whose intervention is necessary for the prescription and composition of food therapies Custom.

Similarly to the vegetarian diet, the vegan diet repudiates the use of meat, fish, molluscs and crustaceans, but unlike it it also excludes all "animal derivatives" such as eggs, milk, cheeses and honey; similar from the compositional point of view, but totally different for political, philosophical and ethical principles, is the diet vegitan.

The vegan diet DON'T it is a balanced diet and, to be continued in the long term, it requires the use of fortified foods or food supplements; In addition to not providing the right quantities of some nutrients, it contains significant concentrations of anti-nutritional chelating agents, such as: tannins (antioxidant), oxalic acid and phytates, which help to further reduce the absorption of minerals such as iron, calcium, zinc and selenium.

On the other hand, the vegan diet is very useful in the prevention of atherosclerosis because: it significantly reduces blood cholesterol (dyslipidemia), it is very rich in antioxidants and, despite being full of carbohydrates, it "should" provide sufficient quantities of dietary fiber to regulate the glycemic index of meals, avoiding (consequently) the glycation of plasma proteins; the vegan diet is also useful in the treatment of hyperuricemia and in the prevention of gouty episodes.

Note: the vegan diet is very rich in phytoestrogens, compounds "potentially" useful in the fight against the typical symptoms of climacteric syndrome.

The vegan diet is deficient in the intake of: cobalamin (vit. B12), calciferol (vit. D), heme iron and ferrous iron (Fe ++), calcium (Ca), and (in some cases) high biological value proteins ; this means that, in addition to the professional support of a dietician - nutritionist - dietician, essential to balance (as far as possible ...) the food combinations, the vegan diet requires food integration with:

In the vegan diet it is essential to manage nutrition in order to provide the right amount of essential amino acids, increasing the biological value of vegetable proteins; for this purpose, it is crucial to maintain a constant association between cereals and legumes (mutually compensable) which also contain good quantities of iron.

Representative of health equipment, he travels a lot, loves pasta and has particularly low muscle mass.