October is the month par excellence of pumpkin, the vegetable with a thousand properties, protagonist of autumn and of Halloween Party. Here then is a second vegan dish tasty, easy to prepare and to make with all ingredients from organic farming. For the pleasure of all vegans, but not only ...

Put the soy morsels in half a liter of water in which a has been dissolved spoonful of instant broth and bring to a boil. Cook for ten minutes, turn off the heat and let it rest for the same number of minutes, then drain the morsels and set them aside.

Cut the onion sliced ​​and put in a pan with a couple of tablespoons of oil, pine nuts, raisins already softened in warm water, peperoncinor according to taste and a pinch of salt. When it has softened, add the diced pumpkin, brown it and then continue cooking, adding a little broth when needed. 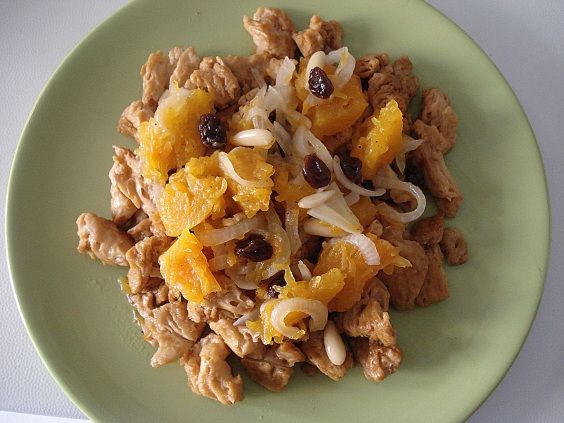 Read all the recipes with pumpkin

add a comment of Second Vegan: Soy stew with Pumpkin