Rice Diet: How Does It Work? 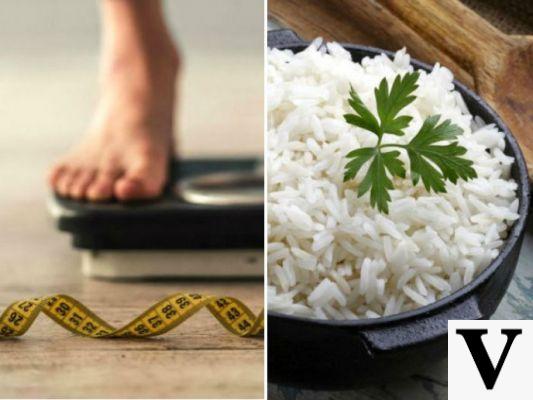 The rice diet is a diet that involves the almost exclusive (or in any case prevalent) consumption of this cereal.
Currently known as a "trendy" slimming scheme, the first rice diet was invented in the middle of the last century as a food therapy against certain metabolic disorders.
Before proceeding with the description it is therefore necessary to make a fundamental distinction between the two types of diet:

The rice diet for weight loss and purification consists mainly, but not exclusively, of the whole seeds of the herbaceous plant Oryza sativa.
The most used types of rice are: black rice, basmati rice, red rice, any brown rice and wild rice (instead belonging to the genus Zizania).
Other foods allowed are: fresh fruit, vegetables, other whole grains or pseudocereals (better WITHOUT gluten such as quinoa, millet, etc.), legumes NOT in a jar (fresh or dried) and few protein foods, such as very lean cheeses, fish and the chicken breast. The following are to be excluded: salt, seasoning oils, butter, margarines, fatty foods, alcohol, etc.
The rice diet for weight loss and purification "should" allow a weight loss of 20-30 kg per month.
The program is divided into two or three phases, respectively characterized by an increasing caloric intake; for example: 800, 1.200 and 2.000 kcal per day.
Below we will report the menu of Phase 1, which can also be reused in the next two phases by increasing the portions and inserting protein foods based on lean meat and fish.

NB. Cup is the American unit of measurement used in the original book and has a different weight based on the content, while the volume is fixed and is equivalent to 236,6 ml. So, one  cup (cup) of water will not necessarily weigh as much as a cup of flour; while a cup of water is equal to 236,6 ml and weighs 236,6 g, since the weight of one gram of water is equal to one ml (specific weight equal to 1 gr / ml), the same does not apply to the others foods (which have a specific gravity different from 1).

The nutritional characteristics that make the rice diet a slimming and purifying strategy are:

The rice diet for weight loss and purification constitutes a drastic and not recommended dietary method.
Other negative aspects of this system are:

If you want to undertake it, it is strongly recommended:

Invented before hypotensive drugs, the rice diet for clinical nutrition was supposed to cure people with malignant arterial hypertension.
Also called hypertensive emergency (systolic pressure above 180 mm / hg and / or diastolic pressure above 120 mm / hg), this morbid condition is defined as a form of hypertension characterized by the acute impairment of one or more systems or organs (especially the nervous system central, cardiovascular and renal), which can cause irreversible damage.
The "original" rice diet provided for strict nutritional restriction and hospitalization necessary for monitoring the patient.

The rice diet was invented in 1939 by Dr Walter Kempner of Duke University, a refugee fleeing Nazism.
The doctor mainly followed subjects with malignant hypertension associated with renal insufficiency.
In this regard, Kempner argued that the kidneys have a dual function:

Therefore (again according to Kempner's theory) by reducing the renal excretory load through the decrease of dietary proteins and minerals, it would be possible to optimize the metabolic capacity of the same by treating malignant hypertension.
Thus it was that Kempner began treating patients with malignant hypertension and kidney failure through the rice diet.
The results were encouraging, so much so that in 1946 he was summoned to present his (documented) study at a meeting of the "New York Academy of Medicine".
The subsequent invention and commercialization of drugs for the treatment of hypertension drastically reduced the need to undertake the Kempner rice diet.
Kempner retired from Duke's Faculty in 1974, but practiced until 1992.
In 2002 the original rice diet became independent of Duke University and in 2013 it materialized in the Rice House Healthcare Program Durham, North Carolina.

The therapy included a total suspension from drugs and the exclusive nutritional intake of: rice, sugar, fruit, fruit juices, iron and vitamins.
In all, the nutritional scheme provided 2.000 kcal, of which only 20 g of protein (4% of energy), 700-1000 ml of water (also from other liquids), 250 mg of sodium and 100 mg of chloride.
Only after a few months, if possible, were small quantities of meat and vegetables integrated.
The rice diet was then popularized through several books that proposed lighter and less rigid versions.

The experiment that confirmed Kempner's hypothesis on the benefits of the rice diet could be summarized as follows.

WARNING! Before the discovery of hypertension drugs, life expectancy for malignant hypertension was 6 months.

Audio Video Rice Diet: How Does It Work?
Sondino's Diet - Side Effects of NEC ❯

add a comment of Rice Diet: How Does It Work?