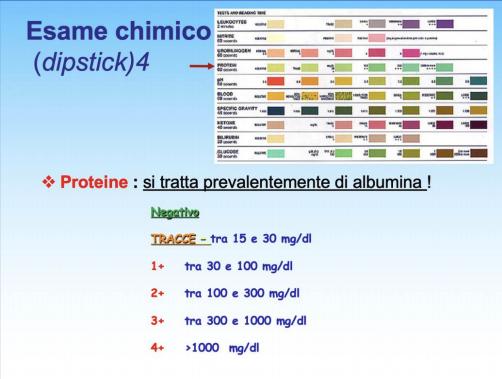 This test partially replaces the traditional test based on the quantification of proteins in a urine sample collected over 24 hours, which sets the maximum normal limit at 150 mg of total protein in urine; higher protein concentrations are considered a sign of proteinuria.

When the albumin / creatinine ratio in urine (albuminuria / creatinuria) is between 3.5 mg / mmol and 35 mg / mmol in women and between 2.5 mg / mmol and 25 mg / mmol in males. The difference between male and female is linked to the fact that men - by virtue of the greater muscle mass - have higher urinary concentrations of creatinine. Other authors consider positive ratios between 30-300 μg / mg, which correspond to values ​​of 3.5-35 mg / mmol for both sexes.

Above these values ​​we speak of macroalbuminuria.

It is defined as such when the protein / creatinine ratio in urine (proteinuria / creatininuria) is equal to or greater than 45 mg / mmol (which is equivalent to an albuminuria / creatininuria ratio greater than 30 mg / mmol). Values ​​below 2 mg / mmol are considered normal, while values ​​above but below 45-50 mg / mmol are worthy of diagnostic investigations and adequate therapeutic interventions, especially in people with risk factors such as diabetes or hypertension (it is necessary better glycemic and blood pressure control and - given the increased cardiovascular risk - lipidemic).