La proteinemia is a blood chemistry parameter aimed at quantifying the total proteins present in the blood.

Normally, a healthy adult has a protein content of about 7 grams per deciliter of plasma (reference values ​​6,4 -8,3 g / dL).

Blood is ideally made up of two components: a liquid fraction - which takes up just over 50% of its volume - and a cellular component (red blood cells, white blood cells and platelets).
The liquid fraction of the blood is called plasma and is made up of inorganic salts, proteins, gases, organic constituents and especially water. This blood component, like the cellular one, also has very important and essential functions for life. In particular, the biological role of plasma proteins can be summarized as follows:

Proteinmia is a test used to quantify the proteins present in the blood. Often, this parameter is measured as part of the panel of analyzes performed during routine checkups, so it is frequently used in assessing a person's general health.
The concentration of protein in the blood can provide general information about nutritional status, particularly useful when the patient has inexplicably lost weight.
Proteinemia can be prescribed together with other tests to understand the cause of an abnormal accumulation of fluid in the tissues (edema) and as an aid in the diagnosis of some liver and kidney diseases.

Your doctor may order the test as part of a general check-up or to investigate the source of suspicious symptoms for liver, kidney, or bone marrow conditions, such as:

Protein may increase compared to the values ​​considered normal in the presence of:

A high concentration of protein in the blood (hyperproteinemia) can also be observed in chronic inflammatory diseases and infections, such as viral hepatitis or HIV.

A low concentration of protein in the blood (hypoproteinemia) can suggest the presence of various diseases. 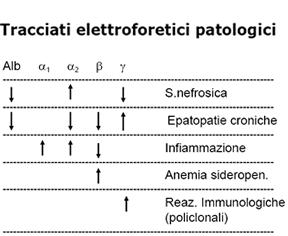 In particular, the proteinemia can decrease in the following conditions:

Low protein levels could also be caused by overhydration, bleeding and burns.

The protein test is done on a blood sample taken from a vein in the arm or collected by pricking the finger (children and adults) or the heel (infants).

For the evaluation of proteins in the blood, it is necessary to be fasting for 8-10 hours.
Prolonged application of the tourniquet during blood sampling can lead to a false rise in protein (greater than the actual amount of circulating protein).

The drugs that can influence the result of the analysis, reducing the measured value, are estrogens and oral contraceptives.

The results of the proteinmia are considered together with those of other analyzes and provide the physician with information on the general state of health of the patient.
If the outcome is abnormal, it is advisable to undergo further tests to identify the pathological condition that affects the concentration of protein in the blood.

Plasma proteins are synthesized in the liver, except γ-globulins (produced by activated lymphocytes), hormones and some enzymes.

The catabolism of plasma proteins, on the other hand, occurs at the level of the intestinal mucosa and capillary endothelium, while normally there are no significant losses in the urine.
For what has been said, proteinemia represents an important index of liver function; in fact, faced with the finding of low concentrations of plasma proteins (hypoproteinemia), the first thought goes to the liver, which could be unable to synthesize them in adequate quantities (liver failure). However, the causes of hypoproteinemia do not always lie in the liver; the origin of this condition may in fact be:


Opposite situations are rarer, characterized by an increase in protein (iperproteinemia).
Among the possible predisposing factors we remember:

In the face of altered proteinemia values, it is important to assess whether the alteration affects all or only some of the protein fractions.

NOTE: Reference values ​​for protein and other blood chemistry parameters may vary slightly from laboratory to laboratory. For this reason, it is preferable to consult the ranges reported directly on the report. It should also be remembered that the results of the analyzes must be evaluated as a whole by the general practitioner who knows the patient's medical history.