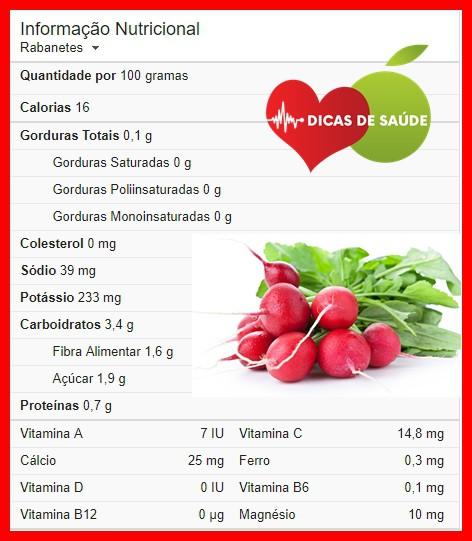 Radishes or radishes they are little-known vegetables in the kitchen of the countryside, in which they are mainly used raw.

However, eat radishes it would bring some health benefits, for example, by improving digestive processes.

Also, the calories of radishes are quite low, therefore, they can also be consumed in the case of a slimming diet.
Let's find out better.

The radishes (Raphanus sativus) are gods vegetables that belong to the cruciferous family and not very common in the kitchen and country, where they are consumed only raw.
Some radish the root is mainly consumed, which in other regions is also served cooked.

According to shape and color, different varieties of radish are distinguished, such as radish, radicula or niger, however, the organoleptic and nutritional characteristics remain quite similar.


Properties and benefits of radishes

There are currently not many studies on the properties of radishes, however, some of them found some health benefits, including:


Calories and nutritional values ​​of radishes

How radishes are eaten

Radishes are mainly eaten raw, however, there are several recipes with radishes.
From sour and pungent flavor, are suitable for contrasting dishes with a flat or sweet taste. For example, they are widely used to enrich salads.
Furthermore, they can be steamed or baked and combine them with potatoes or vegetables.

How to cook radishes

Radishes can be eaten raw or cooked, cooking them in a pan, steamed or baked.


Contraindications and side effects of radishes

Eaten in the right quantities, radishes they have no particular contraindications.

Growing radishes is not a daunting task, as they adapt well to different climatic and environmental conditions.
According to the variety, they are harvested all year round, for this reason, it is easy to find them among the vegetable stalls in any season.

Daikon, the giant radish, and its use in macrobiotic nutrition

In Vitro Activity of the Antifungal Plant Defensin RsAFP2 against Candida Isolates and Its In Vivo Efficacy in Prophylactic Murine Models of Candidiasis, Antimicrobial Agents and Chemotherapy

Effect of Radish Leaves Powder on the Gastrointestinal Function and Fecal Triglyceride, and Sterol Excretion in Rats Fed a Hypercholesterolemic Diet [2008], Journal of the Korean Society of Food Science and Nutrition