Power Tower | What is that? What Are The 3 Best Exercises?

The power tower, also known as "Captain's chair", is a multifunctional tool, developed in height, equipped with a pull-up bar and two parallel bars for performing dips.

It is a tool that needs little space, quite cheap and therefore it can be a good buy for your home gym.

Exercises With The Power Tower

We see the main exercises that can be done with the power tower.

The first exercise we see is the pull-ups, one of the main exercises for putting mass and force in the upper part of the trunk.

In English, pull-ups take different names based on the grip of the bar: we speak of pull-up in the prone grip version, while the supine or reverse grip variant takes the name of chin-up.

Supine grip pull-ups are easier thanks to the better line of force and greater involvement of the biceps.

The execution requires the athlete to hang on the bar, with the grip he prefers at approximately shoulder height or slightly higher, with the abdomen contracted and the shoulder blades adducted.

Starting the movement with his arms outstretched, he will try to bring his chest up until it touches the bar. In the final position the elbows will be pushed back and the shoulder blades will be adducted. At this point you can begin the descent until your elbow is almost completely extended.

For beginners who still can't lift their own body weight, it is possible to start with the help of rubber bands that remove weight and make the concentric phase of the movement easier; Those who are already trained, on the other hand, can overload by holding a dumbbell between their feet or using weight. 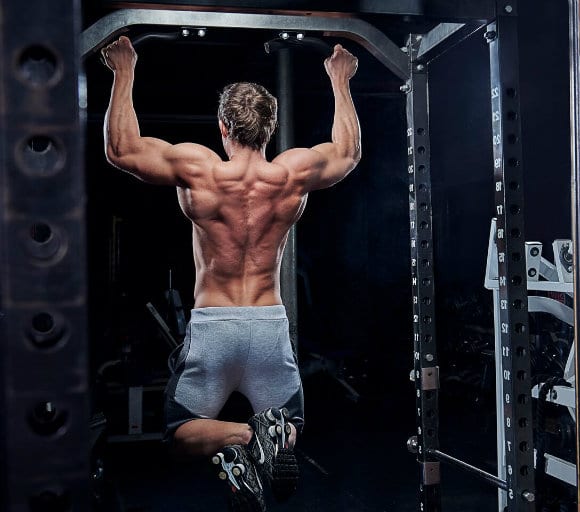 The second exercise we see is the dip at the parallels.

The dips are a multi-joint exercise that stresses the large and small pectoral muscles, anterior deltoid and triceps.

The execution foresees that the athlete positions himself in the middle of the parallel bars holding them firmly with both hands, keeping the arms stretched vertically and the torso leaning forward.

From here begins the controlled descent of the torso vertically downwards until the humerus is approximately parallel to the ground, much depends on one's mobility, for those who have shoulder joint problems it is best to limit your range of motion and come down to a halt before you feel discomfort. After that, you go up until you return to the starting position by flexing the shoulder and extending the elbow.

Some argue that parallel dips can be performed with more emphasis on the pectoral or triceps by varying the inclination of the torso and the trajectory of the arm.

As for the pull-ups weight can be used to make the exercise more challenging.


The third exercise is the leg raise, a good exercise for training the abdominal muscles.

The execution foresees that the athlete positions himself on the chair, grasping the handlebars of the machine, with the forearms on the padding and the back well adherent to the rear padding and the legs stretched out under him.

From here the abdominals contract and the lower back flexes, bringing the legs upwards. You then return to the starting position in a controlled manner.

It is important not to limit yourself to lifting the legs by closing the angle between the torso and the legs, but you have to flex the spine as if you wanted to roll up on yourself, only in this way the rectus abdominis will work actively and not only as a stabilizer.

The leg raise is quite challenging, so you can start by doing the same movement with your knees bent instead of straight legs and extending your legs progressively increasing the difficulty.

If, on the other hand, you are already sufficiently trained, a more challenging version is to perform the exercise hanging from the pull-up bar and bring the legs upwards until they touch the bar itself.

You can then overload by using ankle braces or by holding a dumbbell between your feet.

Audio Video Power Tower | What is that? What Are The 3 Best Exercises?
Athletic Preparation Boxing | Standing Combat Sports Training ❯

add a comment of Power Tower | What is that? What Are The 3 Best Exercises?