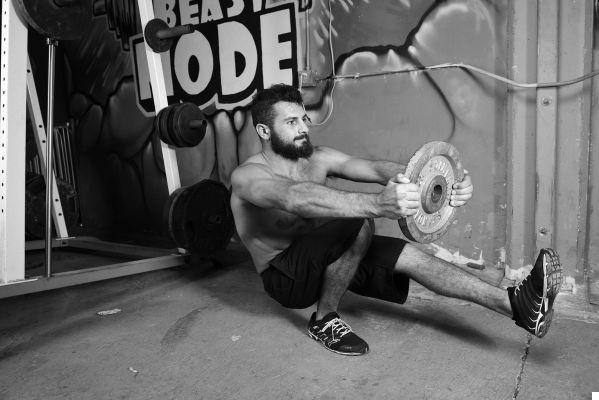 The multipower pistol squat is a multi-joint / accessory exercise

The starting position sees the athlete on one foot only (the right), with the back in its position of strength and with the right hip partially flexed. The left hip is fully extended so that the femur is in the same plane that the bar moves, while the left knee is flexed to 90 °. The right foot is positioned approximately 25 cm ahead of the vertical plane on which the bar moves, while on the transverse plane it is at the same level as it would be if both feet were together. The right foot points at approximately 13 o'clock, but with room for modification based on individual variables. The barbell is held firmly resting on the upper bundles of the trapezius or at the height of the scapular spines. Before starting, the barbell must be removed and released from the stops by simultaneously extending the hip and right knee, first and flexing both wrists, then. Once this is done, the execution consists in flexing the hip, knee and ankle at the same time (dorsiflexion), keeping the back in its position of strength and the buttocks in the same vertical plane on which the barbell moves. It is advisable to continue downhill until you are able to keep your back with its three natural curves or until your left knee touches the floor, also taking care not to project the knee beyond the tip of the foot. Reverse the movement without bouncing, simultaneously extending the hip and right knee and performing a plantar flexion at the level of the right ankle; taking care to keep all the muscles that stabilize the back contracted and balanced, despite being a guided movement. Particular attention to the right knee which must remain aligned with the foot throughout the movement. To facilitate the execution, it is possible to place the back of the left foot on a bench located behind the athlete; doing so reduces the effort to maintain balance, but care must be taken not to actively involve the left limb in the exercise. The execution ends with the return to the starting position. The description refers to the training of the right limb; repeat in a mirror image for the left one.

Muscles involved in the exercise Pistol squat at multipower