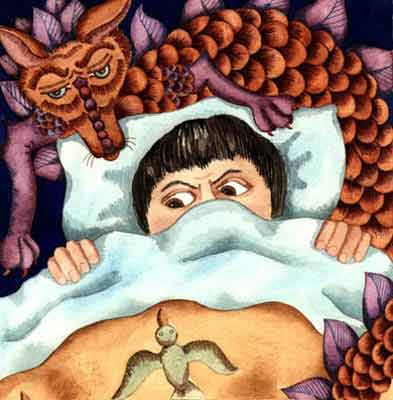 We have all felt fear following a negative dream experience at least once in our life, however there are people for whom this fear turns into a real nightmare, even when they are awake: it is the Oneirophobia o Somniphobia and as its different names indicate it is an intense fear of falling asleep. It is a much more common ailment than one might imagine Oneirophobia itself is relatively young, it was in 2001 when Blechner, almost by chance, he mentions it in his book: The Dream Frontier. People suffering from this disorder may experience asphyxiation, excessive sweating, nausea, dry mouth, tremor, palpitations, difficulty speaking and / or thinking clearly, fear of losing control as it approaches bed time. if the majority of those who suffer from it realize that their fear has no rational basis, they cannot dominate the fears they feel at the mere idea of ​​falling asleep.This phobia originates in the recurrent nightmares that can be experienced both in childhood such as in adult life or having seen films and scenes with impactful content before going to sleep, so that these images manifest themselves in dream experiences in a very realistic form so that it is not surprising that the situation generates a certain fear. from Oneirophobia exhibit various and particular fears: fear of dying during sleep, inability to breathe, nightmares and unpleasant dreams. The treatments are very varied, ranging from systematic desensitization in which the person is gradually exposing himself to the situation that intimidates him. so that fear gradually dissipates, up to psychoanalytic therapies with which we try to find and eliminate the unconscious cause of irrational fear. Among the less conventional treatments but with equally effective results we can meet: hypnotherapy, Neuro-linguistic programming and also the Energy Therapy. However, these have as their lowest common denominator the fact that the person has to reprogram his beliefs, considered as primordial causes of irrational fear. The difference between the treatments lies in the level of consciousness in which one is going to influence since; while the Neuro-linguistic programming and Energy Therapy they work on a conscious level in which you try to change the thoughts that give rise to fear of sleeping, hypnotherapy works on a subconscious level, reprogramming the person's beliefs without playing an active role in the change. the CTRN Oneirofobia, a group dedicated exclusively to managing phobias and anxiety attacks, which offer the possibility to access treatment online.Oneirophobia it is not only an annoying disorder but can also cause serious harm to the person, both emotionally and physically. A night of rest helps to regulate our soul and prepares us for new challenges, consolidates what we have learned and erases all unnecessary from our memory. Sleep deprivation, on the other hand, increases the activity of the brain area closely related to depression, anxiety and other psychiatric disorders.However, even if sleep deprivation normally leads to health problems, there are some cases that are extremely curious for science. of people who cannot sleep; such is the case of Thai Ngoc, a Vietnamese man who has not slept for 36 years. But this is not the only case, the case of a three-year-old boy also appeared on the front page of ABC. On this occasion the doctors were able to diagnose a malformation for which the brain would literally have sunk into the spine in such a way that the areas related to the control of sleep-wake states would be compressed. to discover about this disorder, without a doubt it represents a discapacitating situation for the person who experiences it.

add a comment from Oneirophobia, somniphobia, fear of sleep