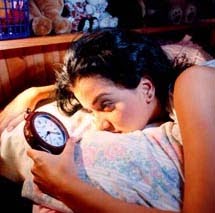 Do you think you have discovered everything that is possible on the internet? So… Would you sign up for a night of "sleep online"? Insomnia treatment programs proliferate and some studies ensure that their online applications based on cognitive-behavioral therapy can be effective. Just a few years ago if someone had talked about the remotest possibility of establishing psychological help remotely they probably would have been locked up in an old asylum, but today it is an expanding reality. In 2004, the first scientific research on online programs to treat insomnia was carried out but its results were much discussed, so much so that people using the online program as well as those in the control group showed the same results. Now you can count on a lot more information to respect coming from the Canada and from Virginia (USA). The 45 volunteers participating in the study were required to keep a diary of their sleep while a program calculated the amount of time they were allowed to sleep. The time they spent in bed was strictly dedicated to the hours of sleep. The result was achieved when people could gradually expand the duration of sleep and make it more consistent, that is, by eliminating intermittent alarms. The same technique was used with another group, only instead of the computer program they were psychologists of theUniversity of Virginia who conducted the therapy and measured the time of sleep. In both cases, the sleepless volunteers were advised to get out of bed if they could not catch up on sleep for more than 15 minutes. The program also helped people stay awake through reading, animation, interactive exercises so that they only went to bed when the urge to sleep was very strong. In addition, the program helped manage their anxiety about the quality of their sleep. Of course, they had to avoid stimulants like caffeine. By the end of the program, which lasted nine weeks, significant differences were observed in both groups: people who submitted to the online program reported greater sleep efficiency (relationship between sleep duration and time spent in bed) and fewer unwanted awake during the night, which decreased by 55%! Similar results are highlighted by a study developed byUniversity of Manitoba in Canada, with 118 volunteers. In the same way that previous research, this study focused on controlling negative thoughts and trying to avoid disturbing stimuli during sleep. 35% of people who passed the online program recognized that symptoms related to insomnia had improved dramatically. Of course, in the future, these programs will be posted online so that people will be able to access them for between $ 20 and $ 30. However, there are already some programs on the net like the CBT for Insomnia, developed by Gregg Jacobs, an insomnia specialist at the University of Massachussets. The idea itself is not wrong, the program would be within the reach of all those who suffer from insomnia and who for whatever reason cannot attend specialized therapy sessions in person. Thus, the applications of Psychology on the net continue their advance and consolidate to demonstrate to the incredulous that many of the activities that are done within the walls of a consultation can also go out and assert themselves on the net.

Do you cure or aggravate your injuries? 10 habits of resilient people ❯