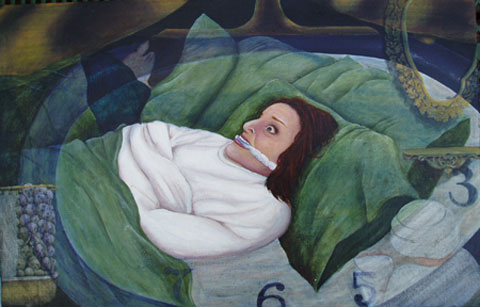 La paralysis in the
sonno it is essentially an atony which is fundamentally evident in the
times when the person is falling asleep or when he is waking up. Like
indicates his name, at this moment the person fails to realize
voluntary movements.

It should be emphasized that paralysis is a process
totally normal sleep and that happens to anyone since it's sort of
defense by our body to prevent damage while you
dream. That is, paralysis prevents us from carrying out the actions we are
living during our dreams, and therefore it is a mechanism
natural protection of our physical integrity. The interesting part is
constituted by the fact that during this phenomenon we are not conscious and therefore
we don't know we are paralyzed. Either way, it is stated that at least once in the
life, half of the population experienced an episode of sleep paralysis.
That is, she was aware that she could not move. There are various studies
who have associated it with particularly stressful periods of life even in
absence of sleep problems. These cases almost always happen at times when
the person is waking up (hypnopompic hallucination). However, when the
sleep paralysis has a hereditary history or is related to other disorders,
it tends to occur when the person is about to fall asleep
(hypnagogic hallucination). There are some studies that have related the
sleep paralysis with personality characteristics such as hypochondria, a
high suggestibility and hysterical traits. Indeed, even if they are not there
large-scale studies that analyze this phenomenon from the point of view
cultural, small studies such as the one developed by the University College of Nigeria, in
which it was found that among people suffering from sleep paralysis,
65,11% believed that these were caused by paranormal phenomena while that
only 18,18% did not believe it. It would make sense to assume that since the
sleep paralysis has a different paranormal explanation (more or less
terrifying) according to the culture, this phenomenon could be more frequent
among the most suggestible people who in some cases have also reported
of the apparitions. At the same time, another study in which yes
compared the Japanese and Canadian populations, he noted that too
if the incidence was virtually identical (Canada 41,9% and Japan 38,9%), the
forms in which these experiences were lived were different. Thus, the majority of
Canadians experienced paralysis as a kind of sleep while that i
Japanese experienced less soothing sensations. Probably
this is due to the fact that in Japanese culture sleep paralysis
it is called: "kanashibari" and refers to a spirit that binds
the person. Sleep paralysis tends to be an experience
terrifying for people, as they feel they are awake and alert but
they cannot move. Sometimes it even seems difficult to breathe. To this
By the way, it should be known that during sleep paralysis the muscles
involuntary keep moving so that the person can actually breathe, too
if very slowly, and does not run any kind of danger. However, during the
REM sleep can manifest some hypoxia that is not normally realized
bill. If you wake up during this phase and try to breathe consciously
without succeeding, we could fall victim to panic attacks or even
to be afraid of dying. Normally sleep paralysis lasts for a short time e
it is not dangerous so it is best to keep calm and relaxed. To this
point it is best to close your eyes and try to slowly move your fingers
hands and feet until all the
body resumes its functionality. You can also try to stand up
suddenly. In this case, it is recommended to wake up well earlier
to go back to sleep, because if we remain at the mercy of this lethargic sleep,
we will run greater risks that the phenomenon will repeat itself again. Besides, it is
It has been shown that those who sleep on their backs are at greater risk of experimenting
this condition.
Public Speaking: How to Eliminate Fear ❯

add a comment of Sleep paralysis: myth and physiology