What is the cause of nightmares? 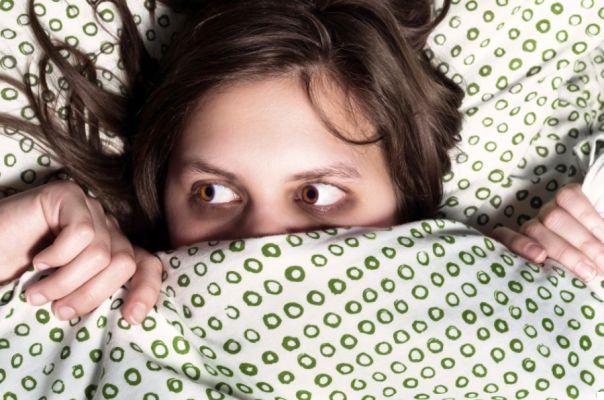 A stranger haunts us, we fall into the void from the top of a skyscraper, we want to warn someone of a danger but we remain voiceless, we have to run to be safe but we remain paralyzed ... These are some of the recurring themes in the nightmares of most adults.

Upon awakening, we breathe hard and our heart seems to want to get out of the chest. In fact, sometimes we need time to realize that it was just a bad dream.

A study carried out at the University of Pittsburgh indicated that 29% of adults usually have at least one nightmare per month, while between 2 and 6% have one nightmare per week. It's curious, but older people tend to have fewer nightmares - nearly half of young adults.

Nightmares generally occur when we sleep deeply, during REM sleep. In this phase, the eyes move quickly but our body is paralyzed because the brain deactivates the motor areas, to prevent movement and avoid damaging us during the dream. But what is the cause of nightmares?

1. Too much stress. Stress is one of the main triggers of nightmares. The tension accumulated during the day can have an impact on dreams since the dream activity is often the expression of our daily fears and worries. In fact, a study conducted at the University of Heidelberg with 840 professional athletes revealed that 15% of them tended to have nightmares before the competition. Therefore, if you are very stressed these tensions are likely to occur during sleep.

2. Exposing yourself to a shocking situation before bedtime. The last thing you do before bedtime greatly affects your dreams. So, if you've seen a horror movie, are reading a book of the same genre, or have just received shocking news, these experiences are likely to be reflected in your dreams. Violent scenes or news you see on TV can also be reflected in your dreams, even if when you awake you think they don't have that impact. Therefore, if you want to sleep soundly, you need to make sure that nothing disturbs the last few hours before going to bed.


3. Get little sleep. Long periods of sleep deprivation have been noted to cause an increase in nightmares. Contrary to popular belief, when we don't get enough sleep, our brains go into a state of arousal that prevents us from enjoying restful sleep. This is why nightmares are most vivid when we have had little sleep for a few consecutive days. In addition, they are also more common in people with chronic pain and who have difficulty sleeping.

4. Negative life experiences. Dreams incorporate many details of our everyday life, but usually abstractly. Therefore, normally nightmares are related to the experiences we have had during the day. In fact, a study conducted at Harvard University in which the dreams and nightmares of 20 people were analyzed concluded that the contents of the last two or seven days usually appear in dreams. Even if in some cases the cause of the nightmare is older and dates back to autobiographical experiences, especially if these have been impactful and we have not completely overcome them.

5. Characteristics of the personality. Certain personality traits may make us more likely to have nightmares. A study conducted in the XNUMXs found that people who had frequent nightmares also shared three characteristics: distrust, alienation, and emotional detachment. Another study carried out by The Graduate Theological Union found that people who tend to be conservative report having more nightmares than liberals.

6. Diseases and drugs. Sometimes the cause of nightmares is an illness. Studies have shown that people with epilepsy, sleep apnea, or restless legs syndrome are more likely to have nightmares because they have a more irregular sleep pattern. Nightmares are also common in the depressed person, in those suffering from phobias and post-traumatic stress. In addition, some medications for depression are known to increase the chances of having nightmares, particularly those that alter the levels of neurotransmitters in the brain, medications for treating Parkinson's, barbiturates and benzodiazepines.


7. Too heavy a dinner. Eating too much before going to bed is one of the main causes of nightmares because it involves slower and more complicated digestion, the metabolism will remain more active, the body temperature will increase and, consequently, brain activity will be stimulated. So you probably won't sleep well and may have nightmares.

What if nightmares were messages that help us solve our problems?

The good news is that not all evils come to harm. In fact, one of the theories that attempt to explain the origin and meaning of nightmares assumes that they arise because at that moment we are thinking about a complex situation and our mind is trying to find a solution to it. During the day, when we think about something that scares us or causes stress, we tend to push the idea away and quickly immerse ourselves in another activity, but when we are asleep, our mind wanders aimlessly and we are unable to resort to it. to distractions. And here comes the nightmares.

According to this theory, nightmares often try to reproduce difficult scenarios to help us find solutions that can help us during the day or just to encourage us to react to adversity. So, even if they scare us, in the end the nightmares wouldn't be all that bad.

add a comment of What is the cause of nightmares?