What the unconscious communicates to us while we sleep 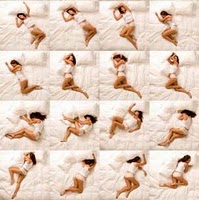 Our gestures, the way we walk, sit and even sleep can offer us information on the characteristics of our personality. Thus, some English psychologists have identified six predominant positions that would be linked to certain personality traits.Although these psychologists relate sleeping postures to an expression of the unconscious, I personally consider them an expression of who we are. of our identity and our peculiarities. It is very difficult for a shy and introverted person to sleep with open arms and hands taking full possession of the bed as we express the characteristics of our personality through the body and bodily movements. theory of bodily positions to explain the personality, ideas that among other things go back practically to the beginnings of psychology, it is always interesting to inquire about new studies that are carried out in the area of ​​science that studies the psyche. Thus, it is never out of place to ask whether our personological peculiarities really correspond to the studies carried out.Fetal position (arms and legs gathered): is the most common, occurs in 41% of people and is twice as common in women than in men. It would represent an uncompromising but very sensitive and emotional person.Position of the trunk (sideways with arms and legs extended): present in 15% of people and would indicate an outgoing, confident and a little naive personality.Position in adoration (sideways with legs extended and arms facing): it is observed in 13% of people and would reveal an outgoing but suspicious personality. Someone who would cost a lot of time to make decisions but who would be very consistent in making decisions.Position of the soldier (horizontal, supine, with arms extended to the sides of the body): present in 8% of people, it would indicate a reserved, calm personality, the enemy of tumult and chaos. He is someone who would set high standards for himself and those around him. -Free fall position (horizontal on his stomach with his hands on the sides of the head, turned to the side): he meets in 7% of people and would show an arrogant, elitist, hypersensitive personality who does not like extreme situations.Position of the starfish (supine with legs and arms open): it is observed in 5% of people and would imply a humble and simple personality. They would be good friends, always willing to help and listen. A curious fact of the experiment would be that only 5% of people change position during sleep. It seems that we are more rigid in sleep than when we are awake! On the other hand, for those interested in further research, studies have been made on the positions we assume when we sleep in pairs. Everything indicates that the position one adopts may suggest the state of the sentimental relationship, even if I am curious enough that at the beginning of the sentimental relationship each person abandons his favorite position to please the other, and therefore a posteriori, the the majority of couples return to adopt their old position each time.

What do your eyes say? 7 messages that send the pupils ❯