The siesta or afternoon nap: some curious facts 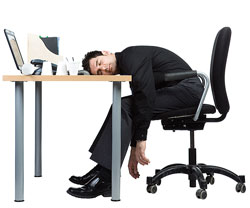 Sometimes, even one nap just ten minutes of sleep provides us with psychological benefits, reducing fatigue and improving concentration. But a afternoon nap done while sitting and with the head resting on the desk does it have the same results as when we adopt a horizontal position?

To answer this question, 30 students were involved who were used to taking a regular siesta, or rest, every day. This was not the first study that dealt with the topic, previously several studies had concluded that the more we recline our head and assume a horizontal position, the more restorative the rest will be. Now Zhao returns to the office to reconsider these results. The participants in the experiment were subjected to a test in which they had to listen to a chain of sounds and keep themselves attentive to a particular tone, signaling it every time they heard it. After this test everyone went to lunch and later the group was divided into three subgroups: 1. Those who took a 20 minute nap adopting a totally horizontal position. 2. Those who took a 20-minute siesta leaned against the desk, with the help of a small pillow to rest their head. 3. Those who sat quietly in the chair, with their heads resting on the headrest of the chair but without sleeping. After the afternoon rest, the participants repeated the auditory test. Throughout this time, people's brain activity was monitored through electrodes placed in the skull. Zhao and his staff were particularly interested in the P300 brainwaves, the ones that revealed information about the level of attention. As you can imagine, the people who slept were in a better mood and more alert, and scored better on the hearing test. However, the brain functioning of people who had slept leaning against their desks had been the same as those who had rested horizontally. Uniquely, those who slept horizontally showed some increase in the amplitude of the P300 waves, thus indicating an increase in cortical activity. The conslusions, for the researchers, are very simple; sleeping briefly after lunch, whatever the position adopted, benefits our performance and improves our effectiveness, but if we can choose, then it is preferable to sleep in a horizontal position.

Suffering and its positive sides ❯

add a comment of The siesta or afternoon nap: some curious facts