Millet, ten reasons to eat it 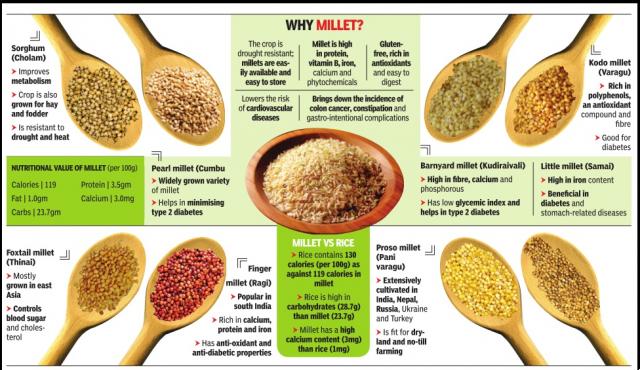 Millet, ten reasons to eat it

If the only cereals you consume are pasta and rice, you risk losing a lot of nutritional richness.

Yes why The mile it's one of those super grains, particularly nutritious and complete, easily digestible and with relatively few calories.

Here 10 reasons why they should never be forgotten and why it would be good to consume at least one dish once a week.

1. Millet for nails, hair and skin

Millet is a special cereal which, thanks to thesilicic acid, which participates in the natural formation of collagen, nourishes the keratin of hair, eyelashes and nails. It is also a natural, moisturizing and elasticizing supplement for the skin. Nevertheless, it strengthens the bones and teeth.

Thanks to its alkalizing effect, millet it keeps the heaviness and acidity of the stomach away. It also has dyspeptic properties, it helps to keep poor digestion and all related symptoms at bay.

3. Millet rich in minerals and vitamins

Phosphorus, magnesium, iron and potassium make it particularly nutritious and beneficial, but above all a energizing cereal. Millet also contains vitamins of groups A and B; in short, it is a food that keeps tiredness, fatigue and nervousness away, particularly suitable during the change of season.

Millet has diuretic properties, so it is particularly suitable for those suffering from water retention.

5. Mile for celiacs and intolerant people

Millet is a cereal particularly suitable for celiacs and intolerant people, for those who generally have difficulty digesting and tolerate gluten poorly.

6. Ideal mile for children and the elderly

It lends itself to being a perfect cereal, by virtue of its nutritional properties and ease of digestion, for children, the elderly, who often struggle to chew, but also convalescent people. It can be used to prepare soups, soups and purees.

7. Millet is suitable in pregnancy

During and after pregnancy, especially when breastfeeding, millet is particularly suitable for give vigor to the female organism, often debilitated.

As reported in the text "The right nutrition during pregnancy”, Raymond Dextreit, French physician, naturopath and nutritionist, as well as one of the leading experts on natural healing methods, says that millet also helps defend against infections and, thanks to vitamin A, is important for the future development of the eyes.

Not only easy, but also fast and versatile. After rinsing it under running water, in a fine mesh colander, it is cooked for about 20 minutes: a little less if you want to use it as couscous, excellent in the company of quinoa; a little more if you then want to blend and use as a thickener for soups and velvets.


The recipes with millet, especially vegan and vegetarian, are among the most nutritious and delicious.

The calories of the millet are equal to 356 kcal / 1488 kj per 100 grams; moreover, thanks to lecithin, millet helps fight the cholesterol and is particularly suitable for those with a sedentary lifestyle. It contains unsaturated and polyunsaturated fatty acids.

Her anti-anemic action it is well known and important. As we have seen, it is a food rich in precious nutrients, well combined with vegetable proteins, such as those of tofu for example, and fresh and seasonal vegetables.

Among the texts indicated for further information, I point out: "Cereals and legumes in the diet for health", By Alessandro Formenti, Cristina Mazzi and"The right diet during pregnancy " by Moreno Gatti - Cristina Gatti.

> The best panic among uncommon cereals

> Energy balance at the table with millet

add a comment of Millet, ten reasons to eat it