Kettlebell Exercises | The Best 3 To Know

The kettlebell is a sort of more or less spherical weight to which a ring is fused to form a handle. It has recently become a very popular tool in classic gym training.

If a classic dumbbell were used for the swing, the exercise would become more problematic. With the kettlebell, on the other hand, the real weight is free to rotate around the ring that is the handle. This is also an advantage in other exercises because allows you to alter the lines of force of the movement.

For example in a curl on scott bench , using the dumbbells or the barbell, at the end of the concentric phase the resistance is zero and the flexors of the arm do not have to make an effort to keep the weight in that position.

In reverse using a kettlebell the ball is always beyond the hand and therefore there is always resistance that the muscle must overcome to keep the arm in place.

This allows you to expand the Time Under Tension of certain exercises. Another advantage is to be able to perform "clean" exercises without necessarily having the same skills as a weight lifting athlete.

The principle is more or less similar to that of the swing, that is that the real weight is free to move around the ring that is the handle. In general, the kettlebell can be used as a replacement for dumbbells in most exercises or as additional weight instead of cast iron discs. 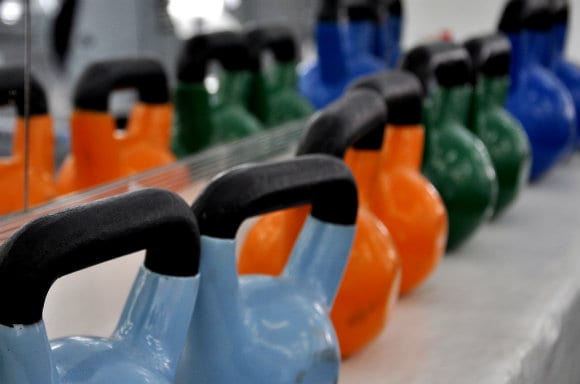 Lo swing it is an excellent exercise that allows you to develop good explosiveness in the muscles that extend the pelvis. To perform the basic variant of this exercise you have to imagine that the arms are only appendages that hold the weight fixed.

They do not participate directly in the movement but they transmit the force generated by the buttocks and the ischio crurali. To perform the exercise, position yourself in a squat position but with your legs slightly more open. Place the kettlebell in front of you to form a triangle whose angles are the two feet and the kettlebell itself.

From this position grasp the sides of the ring with both hands and bring your back into neutral alignment. From here, push the weight, initially with the arms, back between the legs, the pelvis must follow the movement as far as the mobility allows, that is, it must be flexed until the lumbar area can be kept in position. So far the movement is given only from the initial moment generated by the arms.

When it reaches the maximum distance, the weight, like a pendulum, tends to go back. This return phase must be checked with the muscles that extend the pelvis. When the inertia ends, then when the weight tends to come back, explosively extend the pelvis by contracting the glutes and hamstrings. The force generated is then transmitted to the weight which is projected upwards.


The arms should only follow the movement and not actively participate in it. The weight then acquires a motion comparable to that of a pendulum: it goes upwards and then comes back. The movement of the kettllebell must always be the same; the eccentric phase must be controlled and the concentric phase must be in synchrony with the motion of the weight. A much more difficult variation is the single hand swing. In this case the legs must be facing each other, in a "split" position.

The leg on the same side of the kettlebell is forward while the other is backward. Already this position, with a weight on one side only, tends to create instability and therefore to activate the oblique muscles to prevent torso rotation. From this position perform the swing movement as described previously: bring the weight back and then explosively contracting the buttocks and hamstring, projecting it up and forward to then control the eccentric phase.

During this movement the oblique muscles have to work intensely to prevent the rotation of the trunk induced by the moment generated by the weight. Obviously the weight used will be less than that used in a traditional swing. It is essential to keep the torso straight and not to lose the alignment of the spine. 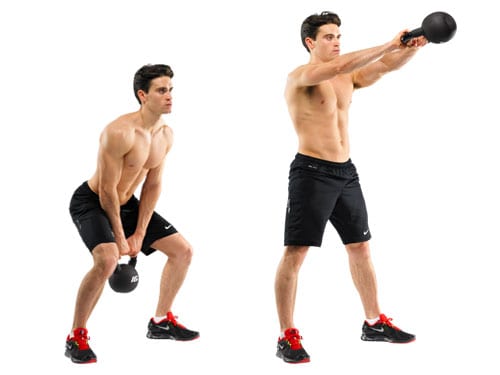 The goblet squat is an exercise very useful for not stressing the lumbar area and knees and at the same time train both upper and lower body. the movement is simple: grasp the kettlebell in reverse, then with the ring facing down, bringing it to a height approximately equal to that of the face. The weight can be leaned against the body or kept at a slight distance.


The greater the distance of the kettlebell from the body, the more work will be on the shoulders and pecs.

Keeping the weight in this position perform a squat movement and then return to the starting position. The benefit of the goblet squat is to shift the center of gravity forward, consequently the flexion in the pelvis will be minimal and therefore the lumbar area remains aligned during the entire movement. This is also a great propaedeutic exercise to the squat itself or to the front squat. The movement in fact transmits what perception you should have in the lumbar area and pushes you to keep the thoracic area extended. Variations of this exercise are the "thruster".

This exercise is a sort of push press in which, however, an entire squat movement is performed, the force generated by the lower part of the body is then exploited to push the kettlebell upwards and then control the negative phase of this by bringing it back in front of the face.

This exercise it requires good stability and good balance and allows you to train practically the whole body in one movement. Another variation is to grab the kettlebell on the sides of the ring and keep the arms flexed at 90 degrees. The position is a kind of two-handed hammer curl.

Keeping the weight in this position perform the squat movement. The movement of the body generates an instability that the flexor muscles of the arm must prevent with continuous contractions to keep the weight still.

Already after a few repetitions you begin to feel the work in the arms. 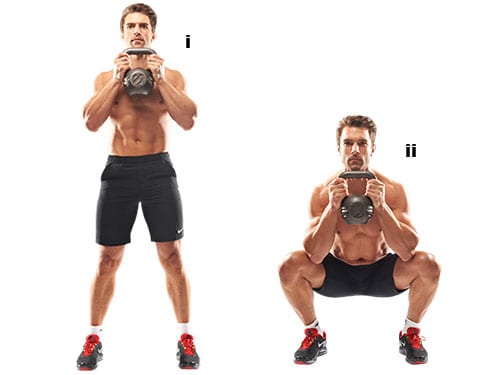 This exercise is quite complicated but it is quite profitable, that is, it allows you to train your core and shoulder muscles at the same time together with a good dose of stability and balance. From a lying position, with your back on the ground, support the kettlebell with one arm that must be held perpendicular to the ground throughout the movement. Bring one foot towards the buttock by flexing one knee.

Place the other arm sideways as a support in contact with the floor, at an angle of approximately degrees with the trunk. From here perform an oblique crunch always keeping the arm perpendicular to the floor and elevated above the head. Move the other arm further back so that you are in a stable position.

From here push through the two support points, i.e. the sole of the foot in contact with the floor and the hand on the ground, in order to support the entire weight of the body and the kettlebell on these two points. From here bring the other leg, until now kept straight in front of you, back by passing it under the pelvis and then resting one knee on the ground. This transition needs to be swift and controlled.

At this point you should be in a position that can be traced back to that of lunges but with one knee on the ground. At this point simply push with your legs and stand upright always keeping the arm perpendicular to the floor. From here repeat the process backwards returning to the starting position. This is a repeat. 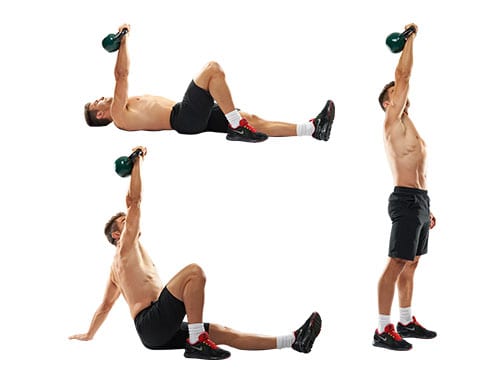 The exercises described are ideal for a simple but effective HIIT session. A training proposal could be the following:

Repeat this circuit for 5 or 6 times maintaining a maximum of one minute of rest between one round and the next. One round should last approximately 5 minutes and therefore the entire workout should not exceed 40 minutes (including breaks). Choose a weight that suits your abilities. The result is a very demanding, short-lasting, full-body workout.

Audio Video Kettlebell Exercises | The Best 3 To Know
Kipping | How is it done? All Explained! ❯

add a comment of Kettlebell Exercises | The Best 3 To Know