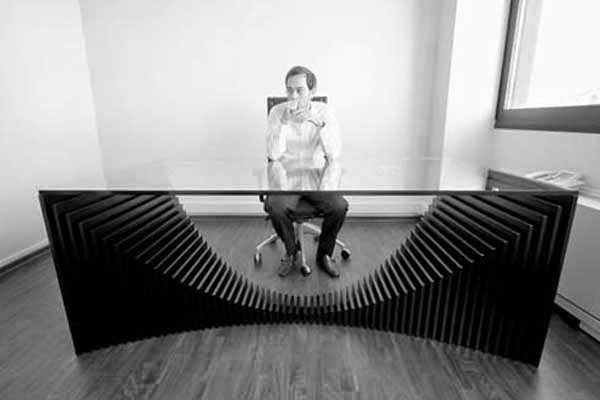 I had previously referred to how architecture affects our mind and now I would like to bring to your attention a very interesting study which suggests that people feel more comfortable talking about their personal problems in large rooms furnished with desks. large, a detail that will undoubtedly be useful to those who have to design the furniture for doctors, psychiatrists and psychologists' surgeries.

This time the experiment was conducted by researchers from the University of Twente in the Netherlands. For the experiment 86 people were recruited whose task was to talk to a researcher in different rooms furnished as follows: a small desk (80 cm distance between
patient and researcher) or large (160 cm between patient and doctor), located in a small room (only 16 square meters) or in a large (19,8 square meters).

Volunteers were asked personal questions that addressed topics such as drug use, sexuality and emotions. The entire interview was carefully recorded so that the researchers could later calmly analyze not only the responses, but also the positions taken by people in different environments.

Thus it was observed that the respondents offered more personal information and adopted positions indicating that they felt comfortable in the larger room and when there was a large desk. Because?

In reality, the researchers did not give a conclusive explanation for this phenomenon, but simply pointed out that a large room and a large desk made respondents feel more comfortable and they tended to open up more emotionally. But we could hazard a few hypotheses.

For example, a small desk, only 80 centimeters wide, would ensure that the interviewee is directly within what is known as personal distance, while a desk over 120 centimeters would allow for social distance. , the one we usually keep with people we don't know. It would therefore be probable that, if a stranger is "forced" to be so close to us, we perceive this as an invasion of our personal space, we feel uncomfortable and adopt a defensive attitude.

Furthermore, we also know that a large desk conveys a feeling of power and confidence and security, factors that could help us have a more complete and sincere communication as we perceive that the professional in front of us has authority.

As for the size of the room, it is also known that large spaces promote mental flexibility because they arouse a feeling of freedom. Conversely, confined spaces encourage rigid behaviors, stimulate self-isolation and can even generate violent behavior.

Of course, this does not mean that you should use huge desks within spaces the size of a football field, because that would completely eliminate the feeling of intimacy. As always, the key lies in a balanced solution.

How to recognize the symptoms of panic attacks ❯