How do you know if a girl likes you 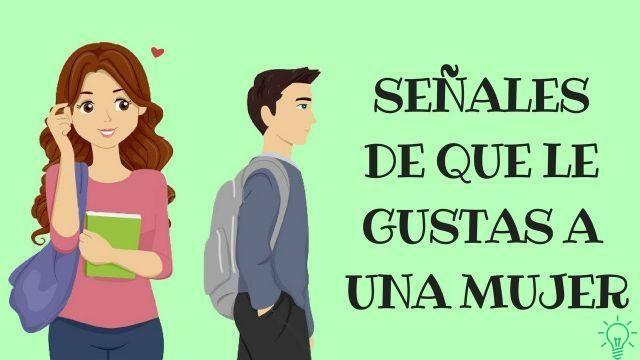 The signals that women send are often complex and difficult to interpret, which is why we wrote this guide on how to know if a girl likes you.

It is usually the boys who initiate the courtship, while the girls decide whether to accept or reject the advances.

While we share this form of courtship with other mammals, this process is a bit more nuanced in humans.

Men are expected to make the first move, such as greeting, conversing, asking a woman out, etc. But really, girls give early signs that they like you, and you have to keep talking to her, or if she doesn't like you, you have to get stuck.

In other words, the girls decide if and when the men can make romantic advances.

Men who don't understand this dynamic are labeled as awkward and awkward at best, and seen as creepy at worst who make unwanted advances.

However, even when a guy picks up on this dynamic, he most likely won't be able to pick up on the subtle cues that a girl likes you and that you need to move on.

Many young people have heard at least once in their life: “I have sent you so many signs! How did you not know I liked you?"

Sometimes a guy gets lucky and finally realizes that there is an interest on his part, but only because the girl is patient and persistent.

Other times, though, what might have been your only chance ends up eluding you.


If you've had a hard time knowing if a girl likes you and you need to continue flirting with her, here are the signs to pay attention to.

How to know if a girl likes you: the basic signs

You've probably read articles online where the author provides a list of body language cues girls use to let you know they're attracted to you. While it's easy to ridicule lists like these, research suggests they actually have some foundation.

Psychologist Monica Moore spent a few months observing more than 200 single women at parties, bars, clubs, and restaurants. From her observations, she discovered more than 52 things that girls do when they are attracted to a boy. You don't necessarily have to do them all, or in any particular order, to indicate interest; some girls have a tendency to flirt. However, the more signs you present, the more likely a girl is to like you.

12 signs that a girl likes you

Among the dozen above, the most common signs that a girl likes you are smiling, maintaining eye contact, and/or repeatedly looking at you when you're not around.


Important rule: these signals must be contextualized

Now there will be guys who will memorize a list like this, and whenever he sees a girl displaying one of these signs, he will immediately assume that she is sexually attracted to him.

In fact, studies have shown that many men struggle when it comes to interpreting social cues, particularly sexual ones.

These signals are complex and very subtle. You should try to interpret them in the context in which they are sent to you.

You must first establish baselines of what is normal, and then look for abnormalities.

Example: If an attractive bank teller looks you in the eye and smiles, she's probably doing it because she's trying to provide good customer service and not because she wants you to flirt with her.

The basic behavior in this situation is for all bank tellers to look people in the eye, smile, and have a friendly conversation.

An anomaly would be for the bank teller to play coquettishly, touching her hair, caressing her body, and smiling more than she should. This would indicate possible interest.

Similarly, if a woman at work touches your arm, don't assume she wants to have children with you. She could be super friendly and outgoing. This is normal behavior for her.

But if a girl is not normally super friendly and open with people, she is with you. Well, this is an anomaly that indicates a possible attraction.


Also read: How to start a conversation with a girl: 8 tips

Another important rule: a single signal is not an indefinite green light: keep watching

Receiving signs of interest from a girl does not automatically mean that she wants to sleep with you. It simply means that she has an initial attraction to you and is open to your first move. It can be a conversation, a dance or you ask her out. Nothing else.

So you ask him for his phone number and set up a date. At the appointment, talk and get to know each other better. If she likes what she feels and feels that an attraction is building between the two of you, she will continue to give you the above signals.

It'll also let you know that she's open to a second date, and she may not even be subtle about it: she'll most likely say (or write) "That was fun" or "I really enjoyed myself tonight."

Also read: "How to conquer a girl: Inconvenient truth"

Then you'll fix another way out. If the date goes well, she may send you additional signals and be open to some physical intimacy, getting as close to you as possible without making direct physical contact. You will then initiate this contact by holding her hand, going all the way to the kiss at the end of the date.

In this sense, reading the following article can help you: How to kiss a girl: 5 simple steps

This dance continues with increasing signs on his part and obvious interest on his part until he is married and has 2-5 children. Or break up for date five because she's cute, but heck, she's a crazy freak.

How to know if you don't like a girl

Just as important as knowing what signs a girl likes you is knowing the body language signs that mean she's not interested in you.

Don't assume it's being difficult. She just doesn't like you. And don't think you can influence her with some stupid towing technique you read about somewhere. She won't work, and you'll come off as a creepy, desperate guy.

When you're undecided: use the Brad Pitt rule

If you can't tell if a girl likes you or not, the only way to clear the doubt is to ask her out.

When you ask her out, keep the stakes low, like going out for coffee. If she says "yes", then she likes you or at least she is open to the possibility of a romantic relationship with you.

If she says no and justifies herself by saying that she has something else to do, then use the Brad Pitt rule to determine if she is really interested in you or not.

If you're not familiar with the Brad Pitt rule, here's a quick rundown:

Imagine if, in your place, Brad Pitt asked this same girl out. Would she use the same excuse with him? If Brad Pitt had asked her out on a date, would she still have said that she had to study or that she was going to the movies with friends tonight? No. She was going to dump just about everyone and everything so she could go on a date with Brad.

Of course, you're not Pitt now. But if a girl is interested in you, she will abandon her other plans to be available to go out with you.

Also read: How to make a girl fall in love: 37 fundamental principles

Of course, there are exceptions; the girl may have a legitimate reason for not being able to make an appointment. She may have to work or go to a funeral. But here's the kicker: if she's interested in going out with you, she'll suggest a different date time. She will say something like "I can't this Saturday morning, but she should be there next Saturday."

If she makes an excuse and doesn't suggest an alternative plan, she just doesn't like you.

If he doesn't want to quit without at least a little push, it's okay to ask him again a couple of weeks later. But if you still get a no, go ahead and move on. There are many other fish in the sea.

Finding out if a girl likes you is a tricky business. You'll probably make some missteps, but as long as you act like a gentleman, you shouldn't feel too embarrassed when faced with rejection.

Be aware of the signals a girl may send if she's interested in you, but consider them in the context in which you receive them.

Finally, don't assume she's ready to come over to your house just because she's sending you signs of attraction.

Remember: her initial attraction simply means that she is willing to go out with you to get to know you better. Keep an eye out for the signs to see if and when to make your next move.