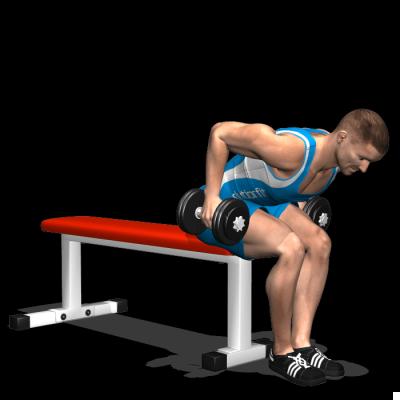 Cross Shoulder Extensions with Dumbbells is a Monoarticular / accessory exercise

The starting position sees the athlete standing with the knees semi-flexed, the hips fully flexed and the back in its position of strength. The torso should therefore be parallel to the floor. The shoulder blades are abducted and the shoulders are internally rotated, the elbows are almost fully extended (and outwards). The arms are on the transversal plane of the chest which passes through the shoulders, but are not perpendicular to the ground so as not to completely release the muscular tension. The dumbbells are held with a neutral grip, i.e. with the palms of the hands facing inwards. The execution consists in adding the shoulder blades and extending the shoulders in the transverse plane up to the maximum degree of hyperextension allowed by individual mobility, which in the pure transverse plane is generally reduced compared to the degree of sagittal hyperextension. All without adducing the shoulders (bringing the elbows closer to the torso), without changing the inclination of the torso, without the angle of the knees and elbows. It is also possible to perform this exercise in the prone position on a flat bench high enough to allow a correct range of motion even during the negative phase.


Muscles involved in the exercise Transverse shoulder extensions with dumbbells

add a comment of Cross shoulder extensions with dumbbells