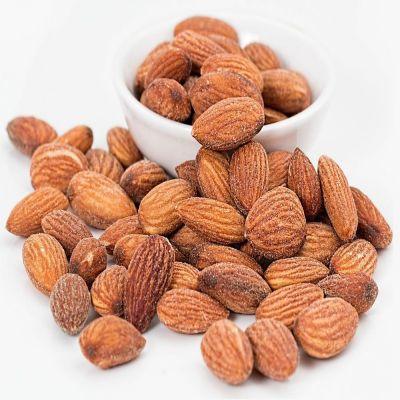 Bitter almonds are the seeds inside the shell of the fruit of the Prunus amygdalus plant, they are called kernels and they are none other than i apricot kernels.

Some varieties of apricot kernels are sweeter and more edible and appear to have properties and health benefits, while instead the more bitter the taste of the stone, the more it is not recommended food consumption because they are poisonous.

As indicated by the name, these almonds they have a bitter taste and are usually used as flavoring in cosmetics or in confectionery for sweets and syrups or in traditional recipes such as the famous ones Amaretti biscuits. The bitter taste is given by a substance contained in the seeds, amygdalin.

In reverse, sweet almonds are the fruits of the almond tree; the visual difference between the two almond seeds is a broad base and greater height for bitter almonds.

THEamygdalin it is a vitamin called Vitamin B17 o laetrile; this substance is a cyanogenic glucoside which during ingestion is broken down and transformed into hydrogen cyanide.

In practice it is a substance similar to cyanide which for the human body is very poisonous and can lead to serious damage up to a fatal outcome with the ingestion of 5-10 seeds for the child and about fifty for the adult.


The deadly dose of hydrogen cyanide is only 50 mg and cyanide poisoning when it is milder causes headaches, vomiting, confusion up to increased heart rate and convulsions.

However, since the days of Hippocratic medicine, thebitter almond water obtained from the kernels of apricots and peaches was a healthy remedy in the ancient Greek world.

To date, some experimental research has associated with this substance anticancer effects precisely because its harmfulness is capable of blocking tumor growth. In 1950 Ernst Krebs hypothesized and tried to demonstrate that healthy cells in our body have an enzyme capable of protecting themselves from amygdalin, while cancer cells without this enzyme cause the production of hydrocyanic acid and therefore the killing of the damaged cells themselves.

It was Krebs himself who named this substance as vitamin B17 even if it has not yet been recognized as an essential substance for biological functions and there are insufficient scientific studies that demonstrate that the lack of this enzyme is only in cancer cells.

It is therefore indicated for some alternative treatments with a daily but limited consumption of bitter almonds such as anti-cancer foods.

However, the risk of such treatments is high and also very variable from person to person. Extreme caution is advised for the toxicity of amygdalin and avoid DIY in order not to incur health risks.


Discover also the recipes to prepare toasted and caramelized almonds

Why harmful substances in seeds?

The plant produces the fruit to be eaten, while the seed represents its offspring: it wants to ensure that the seed lives and is born by producing other seedlings; the mother plant therefore protects the seeds by inserting harmful substances to prevent them from being eaten from animals.

The sugary and palatable substances are found in the pulp so that it can be eaten and the seed, perhaps passing intact into the stomach, transported away.

In fact, the stone in these fruits is hard to protect the seed that will sprout once the fruit has fallen to the ground or has been evacuated by the animal that ate it.

Discover the properties of almond oil for the skin