Akebia: properties, benefits, how to eat

L'Akebia it is a fruit rich in potassium salts. From action djuristica, analgesic, but above all galattogoga, is useful for promoting breastfeeding and diuresis. Let's find out better.

> How to eat Akebia 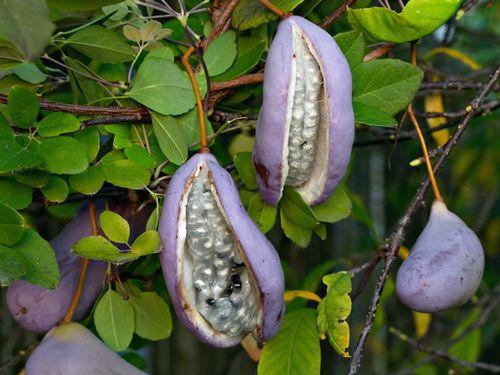 The Akebia genus includes several plants, the most famous of which is Akebia quinata, popularly known as'liana of chocolate"And" five-leaved akebia ", although most often it is referred to simply by the Japanese name akebia.

It is a Ladirzabalacea native to Japan and the Chinese islands, so invasive that it has naturalized in New Zealand and in many states of the USA. The fruits are pale purple pods, which contain an edible gelatin that coats the seeds, whose taste is sweet and barely perceptible.

In the countries of origin it is used in medicine and as a secondary food (especially the leaves and the bitter skin of the fruit), ed it is traditional to offer them to children. In the West it is used as a flowering climbing plant, ignoring the qualities of its fruit, and focusing only on the beauty and strong chocolate scent they emit.

References to the fruit of akebia can be found in ancient Japanese, Korean and Chinese medicine texts: sometimes the pulp and leaves of akebia are prescribed because of their diuretic actions (thanks to the richness of potassium salts), analgesic, anti-inflammatory, antioxidant, but above all galactogogue; not infrequently the consumption of akebia pulp and the bark powder of the woody stem is recommended to women during the breastfeeding period.

The list of ailments for which traditional Chinese medicine prescribes the consumption of akebia continues with: it is useful against amenorrhea, rheumatism and lower back pain, chest pains and headaches, diabetes, colds and general weakness, inflammation of the urinary tract, cases of infections and mycosis.

Most of its active ingredients derive from presence of saponins and triterpenes and the richness of many acids, among which we point out the ascorbic, the olenolic, the folic, the gallic and the mesembryanthemoidgenico.

The calories contained in an akebia fruit, including the peel, (about 70 g) are 24 kcal.

Although there are no known contraindications relating to its consumption, the pulp, seeds, leaves, peel and bark of the akebia stem are rich in active ingredients, especially saponins and terpenes, which in high dosages they can have side effects (especially for the intestine) or can interact with drugs.

It is always good to proceed in moderation and add new foods to your diet with the utmost common sense.

How to eat akebia

The pod of akebia is a very simple fruit to consume: when it reaches maturity the fruit can open easily, as happens for certain passion fruits, to which among other things it resembles.

The pulp is easily extracted with a teaspoon. The peel, bitter, is used as a vegetable: cut and added to soups or fried. The rather bland flavor of the pulp can be enhanced by contrast with lemon juice, especially if used as an ingredient in salads, otherwise it is consumed together with yogurt.

READ MORE
The properties and contraindications of Amla

In collaboration with Giacomo Colomba

Audio Video Akebia: properties, benefits, how to eat
Jerusalem artichoke, how to eat it ❯

add a comment of Akebia: properties, benefits, how to eat