Jerusalem artichoke, how to eat it 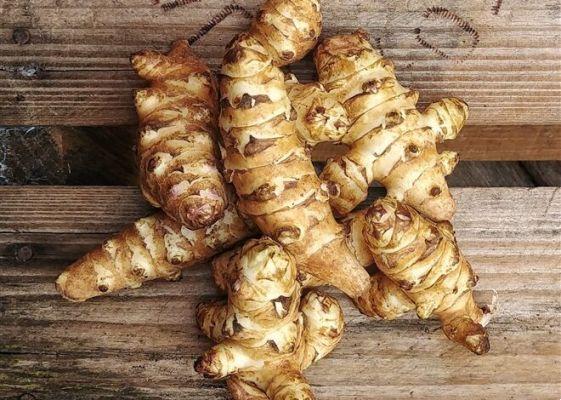 The consistency vaguely recalls the potato; the aroma and flavor, on the other hand, are reminiscent of the artichoke, even if the Jerusalem artichoke is sweeter. Despite being a tuber, it is a low-calorie and low-starch food.

It is very rich in inulin, a very important substance for the blood glucose control. It also has an excellent content of vitamin A, vitamin B and vitamin H.

Thanks to its composition, it constitutes a valid aid for the control of cholesterolemia.

It therefore has excellent qualities; the high consumption of Jerusalem artichokes is however not recommended as inulin is an indigestible fiber and, if overdone, it can cause gas accumulation in the intestine and abdominal tension, especially in people predisposed to these disorders.

It is a food that is little known and used on our tables, with the exception of Piedmontese cuisine where, on the other hand, it is an important ingredient for many traditional recipes. In other regions and the country it may not be easy to find it, but supermarkets with a well-stocked fruit and vegetable department usually have it.


February is a great month to eat Jerusalem artichokes, which are in season from October to March.

How to clean Jerusalem artichoke

Small and lumpy, the first question that those who have never used them ask themselves is: how do you clean Jerusalem artichokes?

> Putting on a pair of gloves: i Jerusalem artichokes, in fact, like artichokes, tend to blacken the hands.
> Prepare a bowl with water and lemon.
> Brush the tubers with a brush under running water, acting quickly because they blacken easily. If the zest is too hard, remove it with a potato peeler or scrape it with a knife. If it is soft, brushing is sufficient. The peel, in fact, usually it is thin and digestible and can be consumed without problems. When you want to remove the peel, to facilitate the operation it is advisable to blanch the tubers first.
> Cut them into slices or cubes, according to the recipe you want to prepare, and, as they are reduced to pieces, dip them in water and lemon.

How to cook Jerusalem artichoke

Jerusalem artichoke can be cooked in many different ways:

> Boiled, like potato, and then simply seasoned with oil, salt and pepper.
> Steam powered.
> Baked.
> In the pan, with a little water and a drizzle of oil. In this case, use up all the water and lightly roast the Jerusalem artichokes after cooking.
> Raw: il topinambur, in fact, unlike the potato, it does not necessarily have to be cooked. To eat it raw, cut it into very thin slices or grate it and simply season it with salt, pepper and a drizzle of extra virgin olive oil, or add it to mixed salads.
> As an ingredient in soups and broths: for example legume soups or minestrone. Its delicate and sweet taste makes it suitable for various combinations.
> Fried, like potatoes. The Jerusalem artichoke chips are really good.
> Mashed potato: Jerusalem artichoke lends itself to the preparation of excellent purées, exactly like potatoes.
> In risottos: as a main ingredient, or to accompany other ingredients, for example hazelnuts or beetroot.
> As a sauce for pasta: you can make a Jerusalem artichoke cream, to be used as a sauce for pasta, or you can cut it into cubes, following a preparation very similar to that of pasta and potatoes.


Read also Topinambur: how to cook it in healthy recipes >>

> Jerusalem artichoke, how to eat it raw
> How to cook tubers and roots

Audio Video Jerusalem artichoke, how to eat it
Quassia: properties and benefits ❯

add a comment of Jerusalem artichoke, how to eat it