Tuck Jumps | How are they performed? Muscles involved and common mistakes

Tuck jumps, also known as “knee tuck jumps” or “knee to chest jumps” are an exercise for mid-high level athletes, which is categorized among plyometric exercises aimed at developing speed and explosive strength.

The purpose of tuck jumps or knee to chest jumps is not only to improve the performance of competitive athletes in the field: anyone who has tried to include them in their workouts will have realized the important energy expenditure, in addition to the considerable cardio component.

In fact, this exercise, despite being part of the bodyweight exercises, lends itself very well as a calorie-killer for all those workouts aimed at weight loss, as long as those who perform them still have good coordination and control of their body.

Remaining instead in terms of performance, tuck jumps see a lot of space wherever you need to improve your anaerobic endurance, as if performed with HIIT intervals they offer a very intense effort that cannot be maintained for very long (compatibly with the correct technique) : sports such as football, basketball, tennis, athletics, combat sports are all examples of possible applications for this purpose.

As for its power in increasing explosiveness, they can be part of a contrasting routine, or seen as separate exercises (see the application proposal at the end of the article). 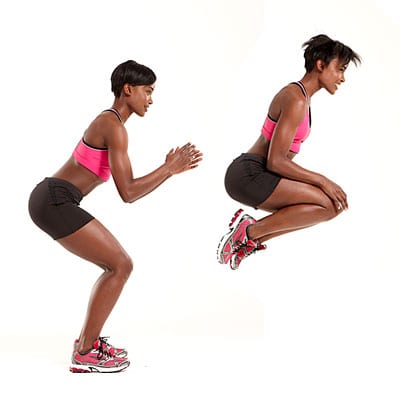 Although it is an exercise without loads, the tuck jumps is a very dynamic exercise that requires coordination and an excellent state of health: for this reason I consider it an exercise for medium-high level athletes.

Observing the dynamics of the exercise, it is clear that most of the work is done by the lower limbs (calves, tibials, quadriceps, hamstrings, buttocks), however, albeit marginally, the core also remains involved in all those propulsion phases before jumping, gathering the knees to the chest and stabilizing after landing.

Although it is a simple jump, there are some tricks that can help avoid even annoying injuries and it is therefore good to list the main enemies of our tuck jump:

How to insert them in the card?

In light of the above, it can be understood that this exercise has multiple applications based also on its role in the context of the workout.

For example, you want to improve the explosiveness of a Thai boxer during the execution of the jump knee: for professionals, a tuck jump can already in itself resemble a lot in terms of mechanics to this Atlantic gesture and could be inserted as a ring conjunction between a non-specific exercise and a specific exercise within a contrasting routine.

The proposed routine can be inserted within the athletic preparation session aimed at explosiveness:

The tuck jumps can also be seen as a progression of other exercises already known, to make the union of the two exercises even more stimulating.

Some examples that come to mind can be:

add a comment of Tuck Jumps | How are they performed? Muscles involved and common mistakes