Traction at the prone grip bar in front 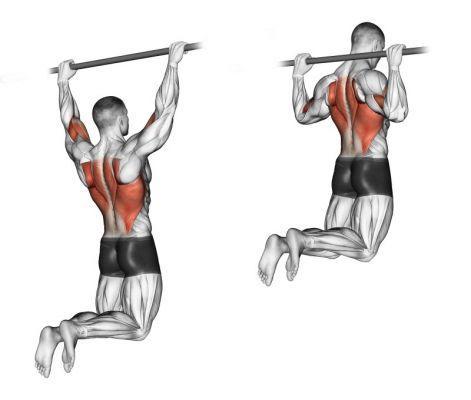 The starting position sees the athlete hanging from the bar with his hands holding the latter at a distance greater than that between the shoulders. The shoulders are abducted in the longitudinal plane and flexed in the transverse plane, while the elbows are extended. The shoulder blades, rotated upwards, can be in elevation or in depression; in the latter case there is no action 6. The torso is slightly tilted back so that during the pull the bar does not hit the head. Maintaining this position throughout the exercise requires considerable strength and coordination. The execution consists of pulling the body towards the bar until it touches the upper part of the chest without changing the initial inclination of the body. This variant is aimed at the development of the upper bundles of the great dorsal and at the central and inferior bundles of the trapezius, while in the flexion of the elbow the load focuses more on the brachioradialis and brachialis. The involvement of the pectoralis major is greater than in the supine or neutral variant.


Action
Scapular depression (optional)
Audio Video Traction at the prone grip bar in front
Exercises for the delts: common mistakes and how to correct them ❯