Traction at the neutral grip bar 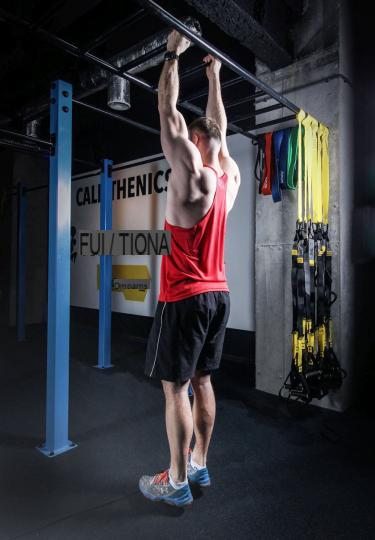 The starting position sees the athlete hanging from the bar with his hands holding the latter with a neutral grip at a distance equal to that between the shoulders. The shoulders can be fully or nearly flexed, while the elbows are extended. The shoulder blades, rotated upwards, can be in elevation or in depression; in the latter case there is no action 5. The execution consists in pulling the body towards the bar until it touches the upper part of the chest without changing the initial inclination of the body. Since the most efficient movement is that which traces a segment of a straight line, the starting position of greatest strength is that with the shoulders slightly flexed so as to have the head on a different plane from that on which the shoulder, elbows and hands lie; using this technique the shoulder flexion range is reduced by a few degrees, the athlete starts with the torso slightly tilted back and maintaining this position requires considerable strength and coordination.

add a comment of Traction at the neutral grip bar