The Assumptions: How Do They Become Our Worst Enemy? 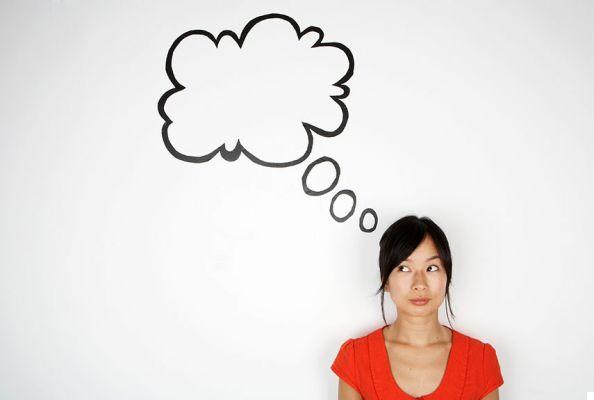 "Not even your worst enemy can hurt you as much as your own thoughts," said Buddha. Supositions can also become our enemies, especially when we do not realize their existence but allow them to determine our decisions, our mood and our behavior.

The truth is that every day we make hundreds of assumptions, without realizing it. While we are talking with a colleague, when we walk down the street, have a coffee at the bar, we talk with our partner and even while shopping. We do not separate ourselves from the guesswork for a second, but this process takes place below our level of consciousness.

We assume many things, but we are not aware of the influence of these assumptions on our happiness and mental balance.

Supposing involves making conjectures based on the indications we have, to arrive at a conclusion that we take for granted, even if there is a good chance that it is not.

The danger of assumptions is that we turn them into concrete facts in our mind. We do not question them, but we assume them as absolute truth without realizing that they are just possibilities in a wide range of options. Then, assumptions supplant reality and we start reacting to the movie we are projecting in our mind, instead of sticking to the facts.

In order not to be fooled by this mechanism, we must have some concepts clear:

Done. It is to notice an event that has occurred.

Assumption. It is the act of taking something for granted without having enough evidence.

Observation. It involves taking note of what is happening, without judging.

Hypothesis. It is an idea to verify.

Done. Your partner arrived an hour late for the appointment.

Assumption. Frustration runs over you and you think he's late because he doesn't care.

Observation. You notice him nervous.

In this way we make a drama of a wrong guess. Instead of testing a hypothesis or simply asking what is causing the delay, we go straight to the guess and make it our new reality.

Why do we make so many assumptions?

We make assumptions constantly. Suppose how others think, feel and act. The problem is that our brain hates uncertainty and chaos, as if it were an efficient secretary, it loves to plan, organize, classify and draw conclusions. In short, our brains want to make sense of the world around us and the things that happen to us at all costs.

The problem starts when things happen that don't make much sense, when we feel insecure and suspicious, or when we don't have all the information to draw pertinent conclusions.

In those cases we desperately look for small signals in the environment that allow us to find an explanation. However, we are not able to objectively evaluate all these signals, but we choose the pieces of reality that serve to confirm the hypothesis that we like best.

As soon as we reach a conclusion that satisfies us, we adopt it as valid. So we start reacting to this new idea, even by closing ourselves off to the evidence that shows us it's not real. In fact, since our brain hates "cognitive dissonance", we not only choose the "evidence" that supports our hypothesis, but we also close ourselves to arguments that may prove that our supposition is invalid.

A study conducted at the University of Lund showed that most people reject their arguments 60% of the time if they are presented by someone else. This mechanism is called “selective laziness” and refers to the tendency to carefully evaluate the ideas of others, but to be much more flexible with our own.

In short: we believe in what we want to believe and we close ourselves to the facts that show us that we could be wrong. This is the mechanism that produces and feeds the assumptions.

The consequences of the assumptions

Assumptions are the source of many discussions and conflicts in interpersonal relationships, because they make us start from an assumption that we believe to be true but which may not be. They also make us adopt a more rigid and uncompromising position, which leads us to close ourselves to the reasons of others.

On the other hand, assumptions are a source of psychological distress. When we suppose something, our brain stops discriminating between reality and supposition because that becomes our new reality. This leads us to make bad decisions or behave in a maladaptive way because we don't consider reality.

This loss of contact with the real world ends up causing emotional distress. In fact, the assumptions we make are often the fuel that fuels frustration, anger, resentment, guilt, and anxiety.

Assumptions are often a source of disappointment because they are the flame that feeds unreal expectations, especially when we expect things to go according to our plans or people to behave according to our rules and desires.

On the contrary, if we limited ourselves to taking note of the world, instead of constantly making assumptions, we would live much more peaceful.

Gary Klein, a psychologist at Oakland University, decided to analyze the assumptions and found that half of the people don't realize they are making them. Most get trapped in their own wrong assumptions and beliefs, taking them for granted.

There is no doubt that giving up supposing is complicated because it is a natural mechanism, a deeply ingrained tendency to seek answers and explanations. Therefore, the first step is to become aware of our assumptions.

We must remember to distinguish between facts, hypotheses and suppositions. Klein proposes some exercises that can be useful for training our thinking in identifying suppositions:

The Halo Effect: how does it work on a psychological level? ❯

add a comment of The Assumptions: How Do They Become Our Worst Enemy?