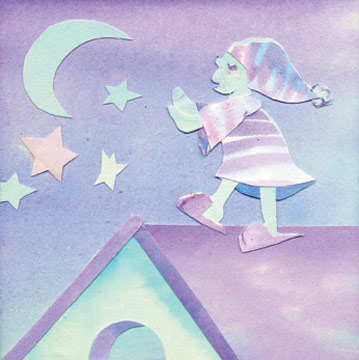 When it comes to the
sonnambulo we refer
generally to the person who, in sleep, leaves his bed and plays some
simple activities, almost always without any purpose. However, often i
sleepwalkers are able to perform more complex activities such as walking around the
room, opening and closing doors, getting dressed, looking for food and drink,
walking around the neighborhood and even driving a car. In some cases the
sleepwalker quietly returns to his bed and when he wakes up he remembers nothing
of what happened. But even so, it must be said that the most normal thing is that the
sleepwalker behavior is both banal and stereotyped.

While the episode takes place
di sonnambulismo it's practically
impossible to communicate with this person. Sleepwalking è
more common in children and adolescents, although it is estimated that at least 3%
of the adult population suffer from it. The episodes of
sleepwalking usually occurs during the first two hours of sleep
(during stages 3 and 4 of non-REM sleep), and is sometimes preceded by
some episodes of night terror. Some scholars suggest this
the disorder is preceded by episodes of drowsiness lasting for years. Cause del sonnambulismo The cause of
sleepwalking are varied, although there is a tendency to relate it
with some psychiatric disorders and epilepsy. Today many specialists
they lean towards a hereditary predisposition, given that in the studies done on
twins it was found that among the monozygotic siblings the symptoms were six times
more frequent than among others. However, it is acknowledged
also that an inadequate family environment where it is produced or promoted
stress and emotional tension is a factor that can trigger or complicate them
symptoms. Sleepwalking is also associated with high alcohol consumption
and some medicines. Other researchers
they claim that the causes of sleepwalking are so different because they differ
in different age groups. So sometimes, sleepwalking can be put on
relationship with a fragmentation of the ego and a profound regression. Consequences of sleepwalking and treatment The major ones
consequences of sleepwalking reside in the possibilities that the person does
causes damage and trauma when in this state, however, other than that
damage, some develop a very strong fear that forces them to close
doors and windows properly or place barriers around the bed
that prevent him from getting up. It must be said that many
people believe that you cannot wake up the sleepwalker for any reason, because
this would cause him problems. Either way, this is just a legend
popular; even though when the sleepwalker is awakened he is usually confused
and bewildered. Most
some cases of sleepwalking resolves over time; for the other cases it is
need to use medicines or learn how to maintain good hygiene
of sleep.
Sleepwalking and Violence: A Very Common Connection ❯