Sirt Diet: What Is It, How Does It Work? 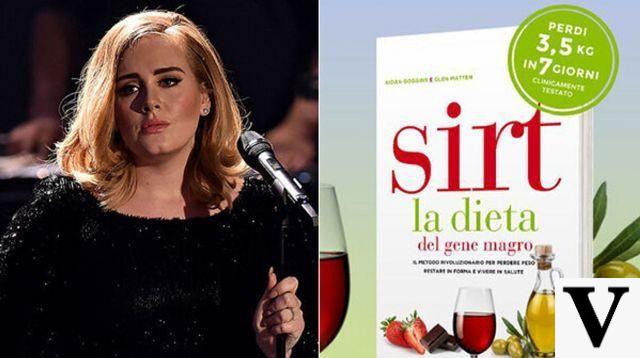 La diet SIRT, also known as "the diet of gene magro", is a diet created by nutritionists Aidan Goggins and Glen Matten, which would allow you to almost lose three and a half kilos in the first week and then to maintain the ideal weight over time. It is a two-phase diet, not particularly difficult to follow, though strongly hypocaloric especially in the first phase or initial phase which lasts 7 days, and which involves concentrated weight loss in a week.

The Sirt diet is replicable over time, with suspension intervals. Before starting a weight loss diet contact your doctor who will be able to evaluate the suitability of the diet according to the general state of health and / or the presence of any pathologies.

Other diets quite in vogue are the Paleo, the Cheto, the pescetariana and the green Mediterranean diet.

This weight loss diet is called Sirt because it is based on the action of sirtuins, a group of seven proteins which have the function of regulating the transcription of genes, that of binding to proteins in the cytoplasm and mitochondria and that of counteracting neurodegenerative processes. Not only that, at the metabolic level, sirtuins have the ability to regulate a great variety of processes related to metabolism, stimulating it.

How does the Sirt diet work?

This weight loss diet involves introducing certain foods into the diet, called Sirt foods (about twenty have been identified, listed in the box in this article), which would be able to activate the sirtuins, triggering a mechanism that simulates fasting, even if in reality one eats. According to the creators of the Sirt diet, these foods would help the body to burn calories faster taken with the diet, thus promoting rapid weight loss but without excessive sacrifices.

How do Sirt foods work? These foods, which are omnipresent in the eating pattern of the Sirt diet, contain nutrients that can regulate the metabolism, to block the production and accumulation of fat, to increase muscle mass, to counteract the processes of cellular aging.

I Sirt Foods they are foods rich in antioxidants and easy to find in the supermarket. They should be consumed daily, alternating them during the week, and combining them with protein sources, such as fish, soy, or eggs. Here's what they are:

The two phases of the Sirt diet

The Sirt diet consists of two initial phases. The first phase is rather low-calorie and lasts a week. Weight loss is immediate. It is a structured diet without excluding any nutrients, and on the consumption of very healthy foods - Sirt foods - which contain bioactive substances with antioxidant and anti-inflammatory power.

La first phase of the diet predicts a drastic reduction in calories and the loss of at least 3 kilos. In the first three days, the daily calorie intake is below 1000 calories (very few). According to the authors of the Sirt diet, you should consume three green juices: in the morning, mid-morning and mid-afternoon, and eat a solid meal. Juices, say the authors of the diet, make the active ingredients of vegetables more absorbable.

Over the next four days, the regimen shifts to approx 1.500 calories with the addition of a second solid meal represented by buckwheat pasta, fish or chicken breast, with a vegetable side dish. Every day we recommend what can be defined and understood as a "prize", but which is actually a functional Sirt food, that is 15-20 g of dark chocolate all'85%.

La second phase of the diet hard two weeks and it is the so-called maintenance phase, in which the weight loss of the first phase takes place. Three meals a day, one green juice and two snacks are eaten. This phase is less restrictive from a caloric point of view. In addition to the 20 Sirt foods, you can add eggs, yogurt, chicken, prawns, beans, potatoes, pasta, pizza and salads, as well as fruit and vegetables. Two or three times a week, with meals, you can drink a glass of red wine: it contains polyphenols, such as resveratrol, capable of activating sirtuins.

A Sirt juice is prepared, for example, with a few kale leaves, parsley, rocket, ½ green apple, 2-3 green celery stalks and an addition of ½ teaspoon of powdered matcha tea.

Sirt diet: what are the benefits?

In addition to the sudden but easily conservable weight loss and the possibility of repeating the diet more than once, at suspension intervals and consulting your doctor, the diet based on the activation of sirtuins would have several benefits deriving from the action of this group of proteins. The sirtuins activators, in fact, they would act in the construction of the muscles, in the decrease dell'appetito, in memory improvement and sugar control in the blood and in the contrast of free radicals. Many Sirt foods also contain substances antioxidants and anti-inflammatory.

Le scientific evidence in support of the objectives of the Sirt diet, however, are not sufficient. No long-term solid human studies have been conducted to establish whether a diet based on the consumption of Sirt foods and structured in these two phases really has measurable positive effects for the body.

Audio Video Sirt Diet: What Is It, How Does It Work?
South Beach Diet: What is it? Pros and cons ❯

add a comment of Sirt Diet: What Is It, How Does It Work?