The shrugs, or shrugs, are an exercise that allows you to work the upper trapezes. In particular, it allows to train this muscle bundle according to its function of raising the shoulders.

The trapezius is a muscle that occupies an extended area of ​​the back: starts from the neck, goes down and opens towards the shoulders, then goes down like a triangle to insert itself near the last ribs.

From what has just been said we can understand the importance that the muscle plays in the posture and in the correct functioning of the shoulder blades. THE upper bundles of the trapezius form only a part of what is the entire trapezium.

The function of the upper trapezius is to raise the shoulder blades and flex the arm laterally at an angle greater than 90 degrees. 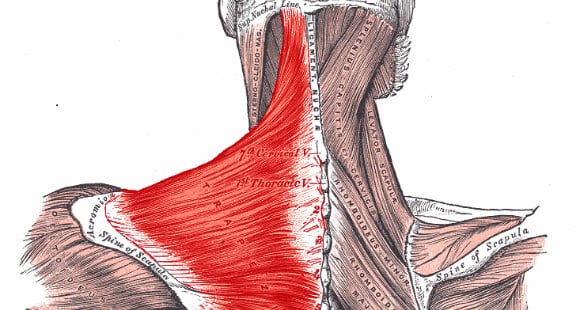 Performing this exercise is quite simple. Starting from one upright position, take a barbell holding it in front of you raise your shoulders imagining to bring them towards your ears.

To slightly increase the range of motion it is useful to have one slight bending forward of the torso and neck in order to be able to raise the shoulders a few centimeters more.

The range of motion is very limited therefore it is useful to maintain the position of maximum contraction for 3 or more seconds and then slowly descend until the shoulders are completely lowered. In the variant with the dumbbells it is possible to insert a further movement: when the shoulders are raised, they can be brought back first and then upwards, as if describing a sort of curve.

Adding this movement allows for a additional range of motion and a slight activation of the middle trapezius. 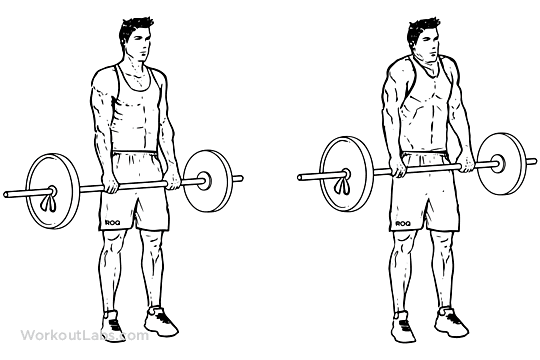 A fairly common mistake is to make some sort of shoulder rotation bringing them forward then up and then back and then down.

This movement makes no sense because the high trapezius does not make the shoulder blades make circular movements but rather elevates them. Making a rotational movement only loads the shoulder joint and puts it at risk without properly recruiting the muscle.

Another mistake is to perform the movement with too much weight. This forces a decrease in the range of motion, already limited in itself, without even being able to make a strong contraction in the maximum elevation of the shoulders.

The variants of the shrugs all provide the same movement but using other tools such as dumbbells or square bars. It is also possible to place the barbell behind the back rather than keep it in front, however, a greater activation was found in this muscle bundle in the classic version.

Shrugs are an open kinetic chain exercise that allows you to train a single function of the high trapezius: the elevation of the scapula.

The function of adduction of the arm beyond 90 degrees of flexion is already performed in others used in other exercises such as slow forward.


This does not mean, however, that you cannot train this function specifically for the trapezius.

There are variants of the shrugs which are more profitable or allow to obtain a greater contraction and at the same time also train other muscles as stabilizers.

Below I propose a super set that allows you to train both functions of the trapezius and at the same time also other muscles:

By “shrug on the bar” we mean to hang on the bar with a neutral grip, bring the feet up and the head down while keeping the back straight and carry out the movement of elevation of the shoulder blades. in essence they are shakes using your body and hanging upside down. 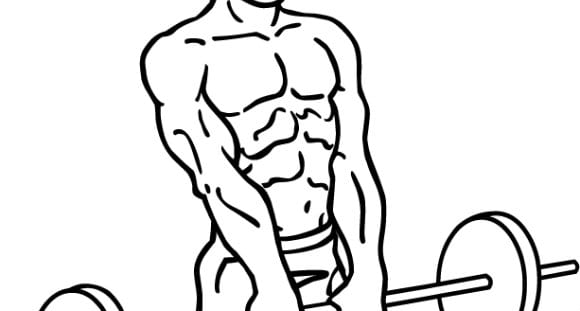 This is a closed kinetic chain exercise, where the body moves, and allows you to obtain a greater contraction and at the same time (if you keep the body rigid and straight) it also allows you to train the abdominals and backs.

The precautions are always those to try to bring your shoulders to your ears, maintain the contraction for 3 seconds and then descend in a controlled manner by stretching the muscle bundle to the maximum. lehand stan shrugs are performed by placing themselves in a hand stand position (hold on to the upper limbs and bring the legs vertical upwards), lean against a wall for support and in that position raise the shoulder blades as if you were doing classic shrugs.

The range of motion will be less but this is because the muscle is already contracted: the arm is practically elevated up to 180 degrees. Focus on the contraction, to be held for 3 seconds and then let the shoulders return to the normal position.

This exercise allows you to have one maximum contraction in the high trapezius and at the same time train the shoulder muscles and also the stabilizers of the scapula. Repeat the super set 4 or 5 times bringing each set to technical failure.