Quinoa, a plant with "unique" characteristics! 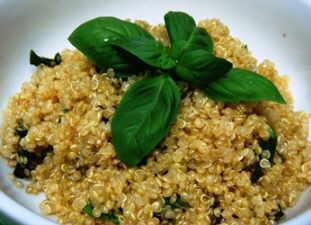 Almost. It is not a cereal (even if it looks like this), it is rich in proteins, it is a mine of energy, it boasts excellent beneficial properties and even manages to independently and intelligently manage its exposure to the sun, as recently confirmed by a tricolor study.

Quinoa a super food that never ceases to amaze

Chosen in 2013 by the UN, which identified it as ingredient symbol to fight hunger in the world thanks to its rich amount of proteins, minerals, fibers and vitamins, and a little later by NASA, which instead ascertained its central usefulness in the diet for astronauts, it is certainly not wrong to define quinoa as a "super food".

Understanding the reason for this success and such emphasis is certainly not difficult. Starting, for example, with the high protein content of quinoa, equal to 14 grams per 100 grams of product.

To continue, perhaps, with its high content of essential amino acids such as Lysine, twice as much as is the case with wheat and rice, or the methionine, able to positively contribute to insulin metabolism.


It also contains a good amount of minerals and vitamins, with particular reference to magnesium, vitamin C and vitamin E.

Read also How to cook quinoa >>

A versatile ingredient for everyday recipes

To enrich the possibilities of coherent and frequent use of the Quinoa its great versatility is also part of one's diet.

Quinoa is the ideal partner for salads, soups, flans, and it is sufficient to buy the one readily available on the market to be able to use it instantly, after a short cooking.

In this regard, note how the packs of quinoa seeds that can be purchased in the best supermarkets and organic shops are generally "clean" of the external coating.

However, the possibility of purchasing "raw" ones is not excluded, still covered with saponin, a bitter substance that protects the seeds from attack by birds.

For this very reason, quinoa seeds should be washed before cooking, in order not to affect the delicate flavor of the vegetable with that, particularly strong, of the saponin.

It is not a cereal, even if it comes close

La Quinoa it is often able to cause a fair amount of confusion in less astute people and, in the same, a hint of surprise when the characteristics of pre-eminent importance are listed.

Originally from South America, it is often mistakenly defined as a cereal: “Fault” - if we can say so - not only of its external appearance, but also of the fact that, like many cereals, it is very rich in starch.


In reality, however, the Quinoa belongs to the family of grasses and - moreover - to look for a relatively close relative of this plant, we should move towards spinach, so much so that the leaves of the plant can be cooked in a similar way, as well as their taste is similar.

An "intelligent" reaction to sun exposure

To find out what the "secret" of quinoa is, the researchers assumed that increased ultraviolet B radiation can affect plant growth and metabolism.

The quinoa was then exposed for 30 minutes at 1,69 W m-2 UVB, noting that this exposure did not cause serious alterations on photosynthetic pigments and flavonoids and that, on the other hand, a significant increase in antioxidant capacity was observed.

When instead the exposure increased to 60 minutes, the above parameters have been strongly reduced, while there has been an increase in the de-epoxidation of the pigments of the xanthophile cycle.

But what does the above mean? Briefly, the results of the research coordinated by Professor Lorenzo Guglielminetti, of the Department of Agricultural, Food and Agro-Environmental Sciences of the University of Pisa, suggest that quinoa would be able to modulate different response mechanisms, depending on the exposure to UVB rays.

In other words, quinoa reacts differently depending on the solar irradiation, putting in place some physiological and metabolic adaptations that contribute to slowing down the natural degenerative processes that are due to the action of UVB rays. A confirmation - if there was any further need - of the extraordinary uniqueness of quinoa.

In short, quinoa continues to amaze and attract its final consumers and researchers alike, with the former obviously interested in buying up its beneficial properties, and the latter ready to reveal some new and unknown characteristics of a food that, after all, still has a lot to share.

Audio Video Quinoa, a plant with "unique" characteristics!
The vegetables of spring ❯

add a comment of Quinoa, a plant with "unique" characteristics!