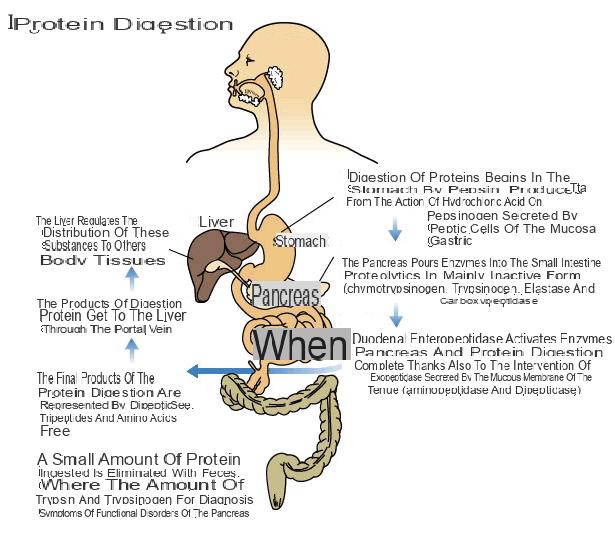 Proteins are formed by the union of simpler molecules called amino acids that bind to each other through peptide bonds. Two amino acid molecules form a dipeptide, three a tripeptide, and so on. We talk about polypeptide when this chain is made up of less than 100 amino acids and proteins when the number of single units exceeds this threshold.

About 50.000 different protein molecules are recognized in the human body, the function of which is determined by their amino acid sequence. Through a whole series of reactions our body is able to autonomously synthesize the proteins it needs starting from the single amino acids contained in food. Since proteins are too large to be absorbed as such and transported into the circulation, some enzymes present in the lumen of the gastrointestinal tract intervene in their digestion by breaking them down into individual amino acids.

During the digestive process, most of the proteins are completely reduced to the individual amino acids. The digestion of these macromolecules begins in the stomach where the combined action of pepsinogen and hydrochloric acid leads to the formation of oligopeptides (short chains of amino acids formed by less than ten units).

Hydrochloric acid, in addition to transforming pepsinogen into pepsin, destroys a large part of the bacterial load, promotes the absorption of iron and the synthesis of enteric juice, bile, bicarbonates and pancreatic enzymes. The secretion of the stomach is influenced by nervous factors (smell, taste of food and conditioning), mechanical (distension of the gastric walls), chemical (presence of oligopeptides) and hormonal (gastrin) factors.

The digestion of proteins is completed by intestinal proteases of pancreatic origin (poured into the duodenum) and produced by the membrane of the same intestine (placed on the brush border). For this reason, protein digestion is normal even after surgical removal of the stomach.

At the intestinal level, the digestion of proteins is completed and the single amino acids, dipeptides and tripeptides, can be absorbed and transported to the liver by specific carriers.

A small amount of protein present in food is not absorbed and is eliminated as such with the faeces (5%). Some peptides formed by more than three amino acids are absorbed by transcytosis and as such can represent a significant factor for the development of food allergies and intolerances.

Absorption of whole, undigested proteins is possible only in the newborn. This phenomenon is fundamental for the absorption of antibodies transmitted through breast milk.

After arriving in the liver, individual amino acids can:

Knowing the digestion of proteins in detail allows us to dispel several myths that have been circulating undisturbed in the world of fitness and bodybuilding for many years: