Pearl barley: properties, calories and use 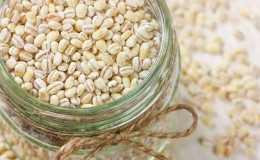 Barley has remineralizing and purifying properties for the organism. In fact, it contains precious substances such as phosphorus, potassium, magnesium, iron, zinc, silicon and calcium. There is also no shortage of B vitamins and vitamin E.

Its use is more than beneficial, especially for the lower part of our body, going to inflame the bladder and intestines, often irritated and fatigued by bad habits, food but not only.

The pearl barley, compared to the hulled brother, is less rich in fiber, more refined, but it still helps to lend a hand to intestinal function, especially in case of constipation and constipation. This is why it can be a valid substitute for rice or pasta in many recipes.

The decoction of barleyWhen used topically cold, it also helps to act on skin inflammations, bringing beneficial and going to play a 'action soothing.

It can also be used to make gargling, in case of throat inflammation. Besides the bladder and intestines, barley also helps the pancreas and stomach; his mineralizing effect it is beneficial for bones, skin, hair and nails. Known is also the natural supplement based on barley grass juice.

The calories of pearl barley


The composition of barley is very similar to that of corn, so the 65/70% is made up of carbohydrates. We also find water, proteins, low fat, fiber, sodium, potassium, iron, calcium, phosphorus, B vitamins.

It is not suitable for those who are intolerant to gluten and suffer from celiac disease.

Use of pearl barley

Pearl barley is an amazing base for many recipes. It starts with first dishes: from the classic pearl barley soup, to the "barley", the special version of risotto, which can be prepared with all the vegetables that the season offers, or exotic couscous.


It is also used as a basic ingredient in unique dishes, such as salads, excellent in a fresh salad with basil, mozzarella and tomatoes, for example, but also with peas, green beans, potatoes and pesto.

Barley is versatile and also perfect in the composition of main courses, such as barley and zucchini meatballs, for example.

And for the desserts? Of course yes, yes! They range from fruit puddings, to barley and ricotta based cakes for example, even barley "cheese" cake, vegan cakes where barley is used instead of cheese!

add a comment of Pearl barley: properties, calories and use