Not just fish: the 5 plant sources of Omega 3

Omega 3, which we often hear mentioned in television broadcasts as particularly important components of our diet, are, together with their antagonists, Omega 6, essential fatty acids. They are defined as "essential" because our body is unable to synthesize them, but it needs to be introduced with food.

Omega 3 are essential for the proper functioning of the organism, and in particular for the protection of the circulatory system and for the prevention of cardiovascular diseases. For this reason, and to avoid nutritional deficiencies, the daily intake of Omega 3 fatty acids, correctly balanced with Omega 6, is essential for any type of diet. In this regard, it must be borne in mind that our daily requirement of Omega 3 is, on average, about 3 grams.
Omega 3 is mainly contained in some types of fish, such as salmon, mackerel, swordfish, anchovy and trout. Also for this reason, a healthy and well-balanced diet should include two or three servings of fish per week. So far, so good. But who doesn't eat fish, like vegetarians and vegans? Are there alternative foods to take Omega 3 and obtain a correct nutritional intake, while remaining consistent with your principles and your food choices?

To answer these questions we have collected some more information about the plant sources of Omega 3, which are:

Linseed oil is by far the richest vegetable source in Omega 3 and the most useful for maintaining a balanced diet even excluding foods of animal origin. In fact, you must keep in mind that all the other plant foods that we will meet in the course of the article contain Omega 3 in much less concentrated quantities than linseed oil, and often accompanied by high quantities of Omega 6, with the consequence of unbalancing the ratio between the two categories of fatty acids.

According to the table published by the Scientific Society of Vegetarian Nutrition, a single tablespoon of linseed oil (equal to 15 ml) provides about 6,6 grams of Omega 3, while 30 grams of ground flax seeds provide about 3,2. It is important to know that linseed oil is a particularly delicate food: it must not be exposed to light and direct heat and, consequently, it cannot be used for cooking. Instead, it can be used as a raw condiment for vegetables, legumes and sauces, or as a simple food supplement. On the other hand, flax seeds, which must be rigorously ground in order to be assimilated by the body, lend themselves well to making your dishes more complete and tasty, from cereals, to salads, to soups. 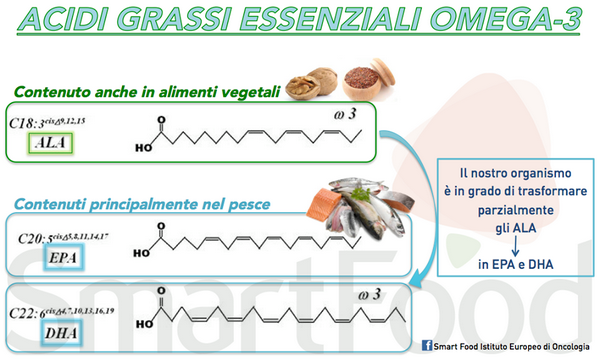 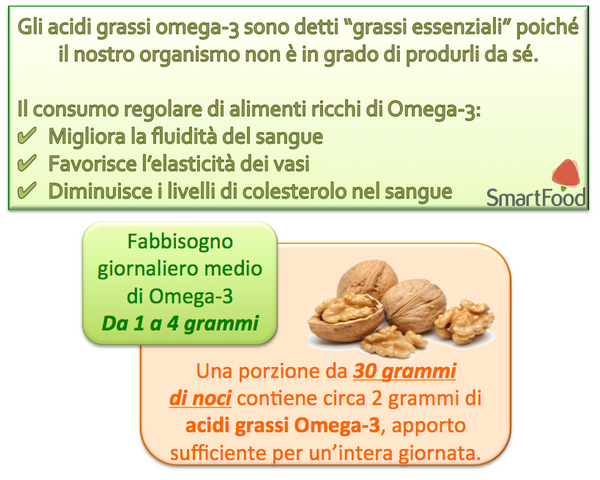 Immediately after the seeds and linseed oil, we find walnuts. About 30 grams of walnuts provide our body with almost 2 grams of alpha-linolenic acid (one of the fatty acids of the Omega 3 group). Among cereals, however, the quantities of Omega 3 are much less relevant: for example, 30 grams of oat germ or Omega 3 wheat germ contribute to our daily requirement of alpha-linolenic acid, respectively, with 0,2 and 0,1 grams. Too little to become the basis of a balanced diet. Finally, returning to dried fruit, very small quantities of are also found in hazelnuts and almonds.

Spinach, broccoli, lettuce and green cabbage, as well as being very important sources of vitamins and minerals, also contain a small percentage of Omega 3. 230 grams of raw vegetables provide, in fact, about 0,1 grams of alpha-linolenic acid: a quantity that, alone, would not be sufficient to satisfy our daily needs, but which contributes to making vegetables an indispensable complement to our supply.

Also beans, peas, lentils, chickpeas and, above all, the soy and its derivatives (such as XNUMX cups milk and tofu) contain small amounts of Omega 3: 200 grams of cooked soybeans provide about 1 gram of alpha-linolenic acid, while a cup of soya milk, equal to 240 ml, provides about 0,4 grams.

Traditional food and very widespread in Japan and other eastern countries, algae have now entered the market also in the West as an alternative food with numerous nutritional virtues. Among these, there is also the richness of Omega 3, which varies according to the type of seaweed. In fact, as we have seen, algae are not all the same: they can be marine or freshwater and more or less rich in fiber, vitamins, carbohydrates or amino acids. In some cases, they are also gods valid meat substitutes. They can be consumed both in leaves and in the form of tablets and algal oil, such as Dietary Supplements, and you can buy them in health food stores, health food stores and on some specialized websites (such as Algheria.com).


Finally, keep in mind that the assimilation of Omega 3 is favored by reduction in the consumption of oils rich in Omega 6, such as corn oil or sunflower oil, which should be replaced with as much as possible olive oil.

In short, whether you are vegetarian or vegan, careful and correct organization of your diet and regular consumption of foods naturally rich in Omega 3 (above all, as we have seen, linseed oil, flax seed e nights) can guarantee you a healthy and balanced diet.

And anyway, if you have doubts or concerns about your diet, the best thing to do is contact a nutritionist, you can find one on NutriDoc.com, a site dedicated to those looking for a nutrition professional.

add a comment of Not just fish: the 5 plant sources of Omega 3